Far Beyond Rubies by Rosemary Morris 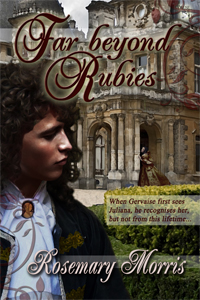 I am delighted to announce Far Beyond Rubies by Rosemary Morris will  be sold in  store on March 29. The historical novel is already available with pre-order savings at:

When Gervaise sees Juliana for the first time, he recognises her, but not from this lifetime…
Back Cover

Set in 1706 in during Queen Anne Stuart’s reign, Far Beyond Rubies begins when William, Baron Kemp, Juliana’s half-brother, claims she and her young sister, Henrietta, are bastards. Spirited Juliana is determined to prove the allegation is false, and that she is the rightful heiress to , a great estate.

On his way to deliver a letter to William, Gervaise Seymour sees Juliana for the first time in the grounds of her family home. The sight of her draws him back to . When “her form changed to one he knew intimately—but not in this lifetime,” Gervaise knows he would do everything in his power to protect her.

Although Juliana and Gervaise are attracted to each other, they have not been formally introduced and assume they will never meet again. However, when Juliana flees from home, and is on her way to , she encounters quixotic Gervaise at an inn. Circumstances force Juliana to accept his kind help. After Juliana’s life becomes irrevocably tangled with his, she discovers all is not as it seems. Yet, she cannot believe ill of him for, despite his exotic background, he behaves with scrupulous propriety, while trying to help her find evidence to prove she and her sister are legitimate

When the popular Charles II died in 1685, he left a country torn by religious controversy, but no legitimate children. The throne passed to his Roman Catholic brother, James.
It was an anxious time for the people, whose fears increased when James II became so unpopular that he was forced into exile, and his daughter, Mary, and her husband, William of Orange, succeeded to the throne.
The Act of Settlement was passed in Parliament in 1701 to prevent a Roman Catholic inheriting the throne. This meant the Roman Catholic son of James II, by his second wife, Mary of Modena, could not become king.
In 1702, James’s childless younger daughter, Anne, inherited the throne from her sister Mary, and Mary’s husband, William of Orange.
Anne’s Protestant heiress was Sophia, the granddaughter of James I. If Sophia died before Anne, Sophia’s uncouth son, George, Elector of Hanover—who spoke no English—would be next in the line of succession.
Anglicanism, a mixture of ancient Catholic ritual and Church government with Protestant tenet, was the official national religion, re-established by law in 1660. Queen Mary and Queen Anne were staunch supporters of the Anglican Church.
Anglicans and non-conformists united in their loathing of the Roman Catholic Church. The Catholics, or papists, as they were called, were suspected of endlessly plotting against the Government, and their civil liberties were restricted. For example they were forbidden to travel more than a mile or two from home.

Congratulations on your latest release. Rosemary! I've tweeted it.