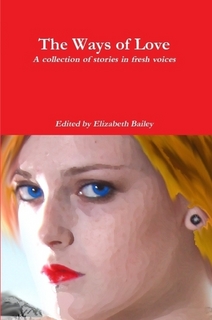 Digital and online publishing is overcoming the traditionally tough route to publication. But it is still true that everyone needs an editor. Which is where what could be called the micro publisher comes in.

“The stories originate from a summer story competition run in tandem with the Romantic Novelists’ Association and the Sunday Express magazine,” Elizabeth says. “I wrote to a number of entrants whose stories had shown promise and offered an assessment with the hope of the rewrite going into the anthology. These fourteen tales are the result.”

Elizabeth describes THE WAYS OF LOVE as a collection of stories in fresh voices. Under the overall theme, the stories are very different, she says: “From light to dark, from poignant to cynical, they illustrate the frailties and foibles of the human heart.”

As a very small publisher, Elizabeth Bailey has to wear all the hats, including editing, proofing and designing the cover. “Fortunately I was able to use an image created by my brother, digital artist David Evans Bailey, which made things a lot easier,” Elizabeth says.

With the hope of success with this first anthology, Elizabeth plans to do more in the future. “There is a special pleasure in introducing a group of creative new writers,” she says in her foreword.

Available in print or download, THE WAYS OF LOVE can be found at http://stores.lulu.com/store.php?fStoreID=2094709

For more information, contact lizannabailey@googlemail.com
Posted by Lindsay Townsend at 09:44 No comments: 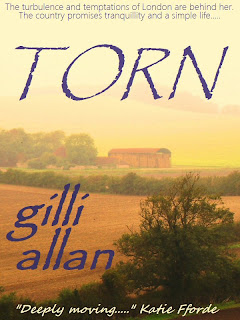 Virtually all my life, on and off, I have written.  I started when I was ten, inspired by my fifteen year old sister, whose ambition was to write a Georgette Heyer style romance.  It was the one book she ever wrote, but I went on through my teenage years – though I never finished anything – compensating, through my romantic fantasies, for the love life I was not having.  Though I loved those Regency romances, my own writing was contemporary and dealt with a darker, seamier world than Heyer’s comedies of manners.  It was a world I knew nothing of, and I depended totally upon my imagination.
In my early adult life I stopped writing – writers were clever, educated people.  I’d left school at 17 with a handful of exam passes and gone on to art-college.  My career was in advertising, where I worked as an illustrator.  When I stopped work to have my son I started writing again.  And the first two novels I ever finished were taken on by a small independent publisher.  The first, Just Before Dawn, though a little unconventional, followed most of the tropes of the category romance.  But with the second I let my hair down and wrote the novel of my heart. It was still a love story, but it was a story which subverted the ‘romance’ stereotypes.
Even now, I cannot follow any kind of formula in my writing.  Love may still be the engine of the plot, not that my characters are necessarily aware of it, but I try to write honestly, refusing to romanticize the downsides and the pitfalls in modern relationships.
TORN - Jessica Avery is a woman in her early thirties with a three year old son, Rory.  She has made a series of wrong choices in her life – job, men and life-style.  Her job came to a disastrous conclusion.  The men in her life have let her down and her life-style involved too many pills, parties and promiscuity. But she believes that by quitting her old relationship and moving from London to the country, she has escaped all that.  Her choice now is to live a steady, responsible life in a tranquil new environment, putting her son’s needs and her role as mother as her number one priority.
But she finds country life less serene and bucolic than she expected. Her ex-partner tracks her down and assaults her as she leaves a local pub.  Luckily, a witness steps in and helps to defuse the situation, but she is left badly shaken.  As an in-comer – and even worse, an ex-investment banker – Jessica is not made very welcome by the local mothers.  Then there is the management of the rural landscape – the interests of commerce versus the preservation of the environment, which begins to engage her interest and concern. The narrative is played out against the low key background story of a proposed by-pass to the local town. Initially Jessica favours a new road until she realises the route it might take, tearing through the landscape she’s come to love.  She is torn between the pragmatic and the romantic decision. The friends Jess makes represent the differing positions. There is Danny Bowman, the counter-culture shepherd; his employer, James Warwick, affluent widowed farmer and father to three year old daughter, Sasha; Gilda Warwick, James’s match-making mother; and Sheila, the feminist nursery school owner.
The title ‘Torn’ can also be understood as referring to the personal choices which confront Jessica.  Despite vowing she wants no emotional entanglements in her life, she is attracted to two very different men.  She finds, to her cost, that in the face of temptation it is not so easy to throw off old habits and responses.  She is a woman who claims she has never been in love. Eventually she is prompted to re-evaluate this stance and to admit to herself, that beyond an undeniable physical attraction, she has indeed fallen in love, but with which one – the suitable man or the unsuitable boy?
Even by choosing neither she will still be making a choice.
TORN - by Gilli Allan
Buy: Amazon UK, Amazon US

Jess opened her eyes. It was pitch black outside the window; inside, the room was divided vertically and horizontally by dark slabs of shadow. Only a pinpoint of amber light, flickering now and again, beamed from her laptop. Though her brain was clear, her head was banging and her mouth felt furry and tasted sour.
Drunk’s dawn, she thought.  Brilliant. Have I had more than an hour’s sleep? At least she was alone. The man had crept away while she slept, thank God. Then she heard his breathing, with its characteristic asthmatic wheeze, and the dip of the mattress as he stirred.  She froze, revolted by the idea that her skin might come into contact with his. The idea of touching a bony, hairy male leg – or worse – was repellent.  And if he was rousing she didn’t want him to realise she was awake.  He turned over then turned back again.  The wheeze had developed into a definite whistle.  Jess sensed he’d woken and was probably lying there wondering what to do.  If she was any kind of decent human being she would tell him she was awake and go and fetch one of Rory’s inhalers for him.  But she stayed rigidly still and tried to control her breathing.
She could come up with all sorts of rationalisations for her ungenerous behaviour. She was naked and didn’t know if her dressing gown was close at hand. He’d be embarrassed if he thought he’d woken her. He might even be ashamed of his frailty, not that admitting he was asthmatic had seemed to bother him earlier, but still, he might not want to make a big deal of it in the early hours of the morning. More importantly, she was embarrassed.  It was a long time since she’d done anything so bloody stupid and had lost some of the bravado necessary to face the stranger in the morning. Especially after you’ve thrown your guts up down the loo a few hours earlier, she thought. Had he fancied her sufficiently, after she’d vomited, to proceed with what he must have believed, rightly, was on offer before? And if they’d had sex did he use a condom?
The head of the bed was positioned under the flight of stairs that led up to the attic room. As Danny got up he cracked his head on the slanting ceiling. He swore quietly then padded across the room, managing to stumble over something – probably the toy basket – on the way to the bathroom. As he pulled the door closed behind him and she heard the light click on she let out her breath. Good.  She couldn’t remember much about Danny but at least he must have a modicum of sense. Even if he were still half asleep the spare inhalers would be easy to spot in the cabinet. As she had the thought she heard the clatter as something fell into the hand basin below the wall mounted cupboard.
So, he must be thoroughly awake by now.  Perhaps he would use the inhaler then decide to get dressed and let himself out of the house. She need never confront him face to face again.  Though she could recall thinking he was good looking, that was last night, and under the influence of alcohol; should they meet again, at some future time, would they even recognise each other?  But Danny padded back to bed and slid carefully in under the duvet, evidently making an effort not to disturb her.  What a cow I am, Jess thought.
When she opened her eyes again it was bright day.  If wearing nothing else, she still had on a watch; it was nearly ten.  It would be tempting to close her eyes again and lose herself in sleep, but she knew it would resolve nothing. If the man in her bed had any sense of shame, he would have removed himself before now. But he was still there; even if not touching she could feel the radiant heat of another body.  Nothing for it then.  She would have to face him – and the situation – now or later. Better get it over with.  Slowly and cautiously Jess began to turn.  She didn’t want to disturb him before she’d had a good look. Cautiously she pushed herself up on her elbow.
He slept like Rory often did. Arms flung back on the pillow, hands limp and relaxed. His face was turned away, against his shoulder, but she could see his profile; the tousled ashy hair, the straight nose, the fan of long eyelashes, the concave plane beneath the cheekbone heavily stubbled with soft blonde whiskers – almost, but not quite a beard.  The beaded chokers were still around his throat, the beads dragging to one side, caught in the crease between neck and collar-bone.  A part of his smooth chest was exposed, the nipple dark and small against the creamy, fine grained skin. Jessica found herself mentally mapping each detail; the pull of the deltoid against the bicep, the perfect rounded form of his shoulder. When he turned his head she could study his mouth, the mouth she had kissed over and over again; she was now perfectly able to recall that part of the evening.  What struck her more forcibly than his beauty, was his youth. Jess had realised he was younger than her, but now she wondered by how much. Tentatively she touched his upper arm; the skin felt silky and cool.
His eyes opened – clear, blue-grey, the iris ringed with indigo. She saw the sudden widening of the pupil but by no other gesture did he display surprise at finding himself under scrutiny.  He stretched and smiled and withdrew his arms from their up-flung position.
‘Hallo Jess.............’
http://gilliallan.blogspot.com/
Posted by Lindsay Townsend at 08:00 2 comments: