Two Medieval Historical Mysteries for under £4.00

Two historical mysteries in the Widow of Bath series are half-price at Amazon, Barnes and Noble, UK Nook, Kobo and Apple until July 15th. For details just go my Lindsay's Book Chat blog and click on the links on the right-hand sidebar 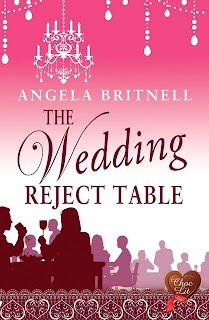 When Maggie Taylor, a cake decorator, and Chad Robertson, a lawyer from Nashville Tennessee, meet at a wedding in Cornwall it’s not under the best circumstances.

They have both been assigned to ‘the reject table’, alongside a toxic collection of grumpy great aunts, bitter divorcees and stuffy organists.

Maggie has grown used to being the reject, although when Chad helps her out of a wedding cake disaster she begins to wonder whether the future could hold more for her.

But will Chad be strong enough to deal with the other problems in Maggie’s life? Because a ruined cake isn’t the only issue she has – not by a long shot.

2nd novella in the Nashville Connections series.   First: What Happens in Nashville.

Maggie couldn’t hold back a heavy sigh as she stared at the wedding reception seating chart.

‘Have they stuck you on the RT as well, honey?’
She glanced back over her shoulder and froze. Smiling right at her was the handsome stranger she’d noticed across the aisle in the church. She’d always been a pushover for a man with intriguing eyes and these were tawny, fringed with lashes so long and dark they should have been illegal, and sparkling with good humour. Stop that right now. You don’t do pick-ups at weddings. It’s undignified and desperate.
‘What on earth are you talking about?’ Her tone of voice was sharper than she’d intended.
‘The Reject Table.’ His deep smooth voice was laced with a delicious warm drawl she could’ve listened to all night. ‘Of course they wouldn’t call it that, they might gloss it over by using the term “Independents”, but we know the truth, don’t we?’
‘Do we?’ Maggie bristled. She refused to admit she knew precisely what he was talking about. She’d endured enough of these ritual humiliations while seeming unable to sustain a relationship long enough to change her Facebook status.
‘Yeah, sure do. I’m guessin’ your English ones are the same as ours. We’ll have the elderly maiden aunt, the bitter newly divorced third cousin, the grumpy dishevelled organist,’ he reckoned them all up on his long, well-shaped fingers, ‘and of course the mandatory gaggle of single strays.’
‘And which category do you fall into?’ Maggie’s brazen question shocked her into blushing hotly.
‘Take a wild guess,’ he challenged, and stepped closer so his arm brushed against hers.
God, he smells delicious. The tempting combination of spicy cologne, soap and something indefinably male wafted in the air and would’ve made her swoon – if she was the swooning type. Maggie’s middle name should’ve been Sensible.
‘Well, you’re obviously no one’s maiden aunt. The organist was sixty if he was a day and no one could describe you as dishevelled. By the process of elimination I’d say you’re the rogue transatlantic cousin representing the groom’s American grandmother who’s too old to travel.’ As soon as he’d spoken it’d clicked in her filing cabinet of a brain. She hadn’t helped the bride with the seating plans without gathering some useful information.
‘Spot on.’ His eyes darkened with surprise. ‘How about you?’ Maggie winced at his direct question. ‘Sorry, sore point?’
She lifted her chin and contrived to look unconcerned. ‘Not at all.’
‘Forgive me. I’m forgettin’ my manners all around today. I can’t believe I said that to a beautiful lady.’ He thrust out his right hand. ‘I’m Chad Robertson from Nashville in the great state of Tennessee. By day I’m a music attorney, and by night I turn into the rogue you rightly determined me to be. A single one, if you’re at all interested.’ The almost-question hung in the air between them.