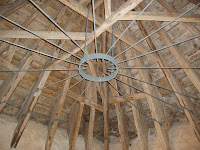 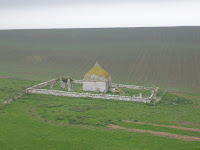 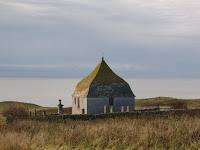 Many writers draw inspiration from the buildings and physical geography of their surroundings.
In my second novel, The Glorious Twelfth, the Sinclair mausoleum at Ulbster is the model for Sir Ranald's mausoleum. It stands in open farmland near the ruined farmstead of Ulbster Mains to the south of Wick. The weather vane on the top records 1700 as the date of construction. Maps indicate that the site was formerly a chapel dedicated to St Martin and the surrounding graveyard bears testament to the ground being consecrated. An ancient Class II Celtic stone originally stood in the graveyard confering great antiquity on the site. The stone now stands in the Caithness Horizons Museum in Thurso.
The square building has very pleasing proportions, topped by a complex ogive shaped roof where the tile size varies accoring to the slope. Internal steel bars have been installed to provide further support for the roof. The burial crypt was cleared of remains and filled in some time ago. It had long since been supplanted by a new mausoleum built near Thurso Castle by Sir John Sinclair, the famous agricultural improver, around 1800. 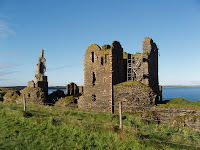 The second inspirational building is the ruined Castle Sinclair Girnigoe, built by the Sinclairs. A major archaeological project is currently in progress to both understand the history of the building and stabilise it against further deterioration. The latest research suggests that a building stood on the site as early as the thirteenth century. It was heavily fortified and the major administrative centre of its day, but was abandoned as early as 1680. Cycling to this castle was a favourite boyhood outing. We climbed the walls, explored the dungeon, heart in mouth, and went down the passage to the sea. It is the fictional site of the final dig at the end of The Glorious Twelfth.
With best wishes
Alan Calder

How interesting! Love the pictures. Fascinating. Thanks for sharing!

Thanks Jerri
Glad you enjoyed.