When in 1942 an emergency appeal was made to recruit members for the Women’s Timber Corps, a branch of the Women’s Land Army that is now barely remembered, critics didn’t believe it possible for young girls, many of them typists, hairdressers and shop assistants, to tolerate the cold and mud of winter, the long hours and heavy work involved in the vital task of timber production. Timber was needed for pitprops and telegraph poles but with young foresters having been called up, there was insufficient manpower available. Training centres were set up to which volunteers came at a rate of 250 a month, and after a general introduction to crosscutting, sawing and felling, clearing and measuring, as well as haulage with tractors and horses, the girls specialised in the branch for which they were found to be most suited. They could not be expected to learn all the tricks of the trade in a month but were taught the basic skills, a respect for their tools, and an understanding of the importance of sound timber to the extent of being taken down a mine to view it in situ. 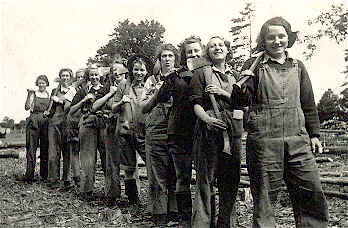 The two women I interviewed: Elsie Taylor and Betty Kirkland, joined as young girls, Betty only 17, because she was too young to get in the WRNS. This is Betty, standing right at the front. Elsie simply fell for the uniform. This comprised corduroy breeches with a green sweater to work in, and alpaca for best. ‘The overcoat was lovely and warm,’ Elsie remembers, ‘in a reddish brown with a fleece lining.’ Both women felt proud to wear the crossed brass axes stitched on to it, and the Timber Corps hat which was later changed to a green beret. They wore halfway boots which laced up over wool socks, turning these down when it was fine, up when it was wet. 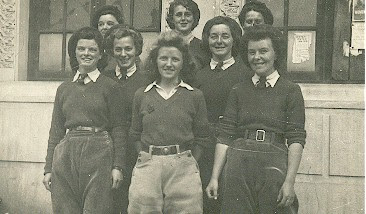 Of those first days in training, Elsie remembers huts of corrugated iron, accommodating up to thirty girls in each. She was provided with a blanket and a pair of sheets and matron insisted on hospital corners which she didn’t know how to do, so was made to do them over and over until she got it right. Every morning they would be woken by a loud bell followed by a bellowing voice telling them to, ‘Stand by your beds’. It made Elsie feel as if she truly had joined the army.

At the end of the month of training, qualified candidates were formally enrolled in the Timber Corps and sent to work up and down the country, some to timber merchants, the rest employed by the Home Timber Production Department, often far from home so that they had to be billeted with farmers or forestry workers. The farmer provided the tools, which must be kept sharp. Blisters were common, as were aching muscles but there was little time for sympathy or pampering. 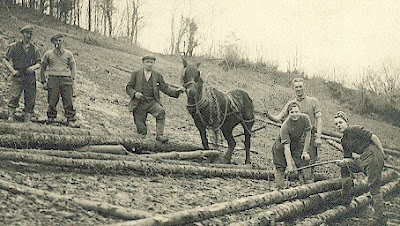 Elsie shows me her hands, happily explaining that they have been scarred ever since. ‘Mother had a fit when she saw them. But over time the skin went hard and you never felt it after that,’ she told me. Neither Elsie nor Betty had any complaints but rather recalled with good humour back aches, chopped fingers, sun stroke, and spiders in their clothing.

They undoubtedly loved the work, and claimed to be stronger and feel fitter for being outdoors, ailing little in the way of coughs and colds. But undoubtedly it was a hard life, and many Timber Jills were not so fortunate, suffering much worse problems, even attacks from unsympathetic farmers or foresters. 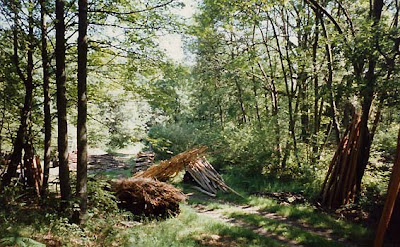 The Timber Corps recruits were taught how to take trees down, how to use a bushman saw, and a longer cross-cut type which needed someone at each end. Betty explained how the tree must be cut close to the ground, leaving no stool that you could trip over, or a tractor bump into. She used a 5lb Ellwood Felling axe which she still uses to this day, for all she is passed eighty. On all of my visits there was always a good stack of wood standing outside her cottage, that she’d chopped herself. ‘At seventeen, and quite small, it was a hard job to peel off all the bark, and take out the knots with a draw knife,’ she said. ‘The final task was to burn all the remaining small twigs and leaves, known as brash, to avoid bugs which could infect the remaining trees.’ Elsie recalls her first felling with some amusement. ‘I was so excited I called out timber, and one of the men working nearby shouted, ‘Look out, there’s a match-stick coming down.’ She furiously informed him that when she was as big as him she’d take a big one down. 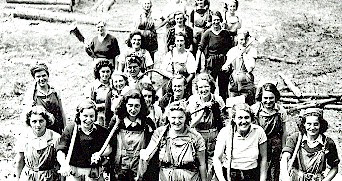 Betty worked for most of the war in Grizedale Forest close to the German POW Camp, which was strictly for officers. She remembers the PoWs used to march up and down the road for exercise. They’d make comments to the girls and the guard would shout at them: ‘Eyes front.’ There was a machine gun trained on them the whole time, much to the outrage of the prisoners. ‘We are German Officers, and if we say we will not escape, we will keep our word.’ 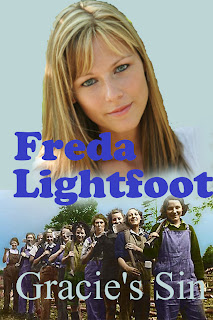 In my book Gracie’s Sin, an escape is attempted, based on a true incident. The three girls struggled to do their bit in the war. Lou sees it as a way to stay near her lovely new husband. Instead it brings heartache and tears, fear and betrayal. Yet it is she who holds the friends together when the going gets tough. For Rose it means escape from her bullying brother. But her desperate search for love and acceptance leads the fun loving girl to change and be willing to inflict the same cold hearted treatment upon others; even her closest friends. And Gracie commits the greatest sin of all, by falling in love with a German officer.

What is a romance? 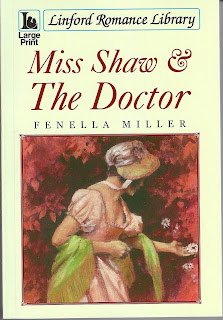 I have to share with you my latest cover from Linford Romance – they do such beautiful covers, don't you think?
However, my post is actually about the topic "What is a romance?" We were having a lively debate about this on the RNA loop the other week and I thought I'd share with you some of the definitions that came up.
A romance novel is a love story that keeps the reader reading and rooting for the hero and heroine. The romance must be central and be 70% of the book.
A romantic novel must feature good and evil, idealisation, wish fulfilment, nostalgia and have a happily ever after ending.
A romance book can have a strong underlying theme but the main thrust of the book must be the romantic aspect – and it helps if the hero and heroine meet each other in the first few pages.
A true romance must have the hero and heroine together throughout the book – they can't meet halfway through.
There is a tendency to equate romance with light. There are romances that deal with profound subjects, also ones that are basically action adventure and of course the category romances that have no secondary plot and concentrate solely on the developing relationship between the main protagonists. All these are romances.
These are some of the views expressed in the discussion. My feelings on the subject are these.
Can a book be be called a romance when it is the love between siblings or parents and their children? Certainly the award for the best romantic novel has been given to books where a romance is peripheral to say the least. The books I write I would classify as Regency romantic adventures - there is a strong romance between the hero and heroine but also a linear plot and subsidiary characters.

I think the main difference is whether it is a love story or a romantic story. In the first, as in the Mills & Boon or Pocket Novel, the book is just about the hero and heroine and their relationship. A romantic story can be historical, paranormal, contemporary, young adult, it can have profound themes, be humorous, be action packed – in fact anything at all. This kind of book will have a strong romantic element but so much more as well.
Two things everyone agreed about were that there must be a "happily ever after" ending or at least a "happy for now" ending and that both main characters must embody all the characteristics one would expect to find in a hero or heroine.
What do you think?
best wishes
Fenella Miller

Journalist Selene is a woman with a plan. Although her career is a success, she decides that something is missing in her life–romance– so she throws the full brunt of her intellect and determination behind filling the gap. After saving and planning every detail, Selene finally arrives in her Central American destination hoping for primal adventure and a little loving on the side. Sure, she meets Hudson and has an afternoon delight with an unnamed native, but Selene’s greatest impediment is the one she refuses to acknowledge. Her training as a journalist keeps her as observer and judge and prevents her from ever living in the moment. Will the danger she encounters be the impetus she needs to find her passion? Or will she compartmentalize the men in her life so that she can safely put them back in their boxes once she’s finished playing with them?


David Russell’s story is lush with description and replete with back story. His prose is strung like a strand of pearls, each shiny treasure perfectly chosen, making this story more literary than genre fiction. The narrative, told usually in omniscient POV, is almost surreal and blurs the space/time continuum. All together Self’s Blossom is for those who want a reading adventure off the beaten path and are pioneering enough to sink in Selene’s lugubrious world.

Buy 'Self's Blossom' at Amazon.co.uk or Amazon.com .
Posted by Lindsay Townsend at 13:24 No comments: