'Sebastian the Alchemist and His Captive' on Amazon & Other sellers 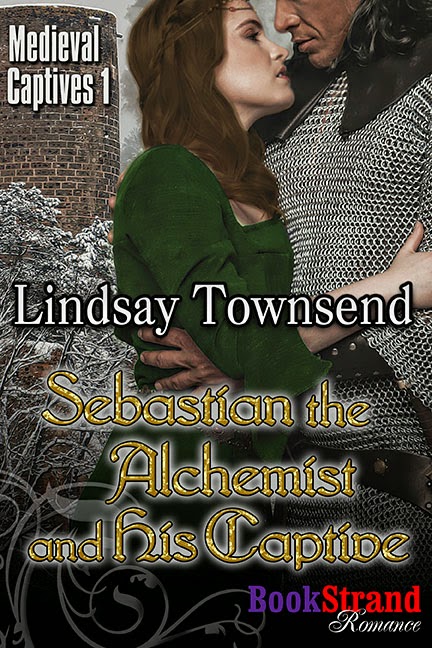 OUT NOW FROM AMAZON AND OTHER SELLERS

He takes her for hate. Will he keep her for love?

Sebastian, lord of the tower in the northern high lands, is a proud, bitter man with a dark past. An alchemist and a warrior, he has had lovers but knows he is ugly—experience and betrayal have taught him that. When Melissa, the beautiful, neglected daughter of two old enemies, falls into his possessive hands he is determined to hold her. Why?


As one of the detested and defeated Felix family, Melissa must cling to her courage when she is claimed as a war-prize by the tall, grim Sebastian. Expecting torture and ravishment, she finds instead a peace and sanctuary that she has never known. Treated with kindness for the first time in her life, Melissa begins to blossom.


But there are secrets and old betrayals between them. Sebastian’s abiding jealousy is not easily quelled, especially when someone at the tower seeks to destroy his growing love with Melissa…

Sebastian settled back in his chair. He still had many petitions to read and tomorrow he would fight a duel, with mace and daggers, but for the rest of the evening…Yes, he could grant himself the time, the indulgence. Ignoring the dull ache in his lower back, he stretched his long arms above his head.


“Robert.” He spoke quietly to the gangling chestnut-headed squire patrolling by the door. “Send the girl to me. Then get some rest before you fall over.” The youth had only lately recovered from a fever and even in the firelight looked as pale as the falling snow outside.


“I will sleep when you do, my lord.” Robert gave a brief, jerky bow and slipped from the stone chamber, his rapid footsteps fading in the vastness of the tower. Sebastian returned to his reading, making notes on the parchment, listening to the spit of the flames, and waiting. What will she be like? He had only caught a glimpse yesterday, when he had claimed her as his prize. The child of an old enemy and my first, unrequited love. What have her people told her about me?


The door swung open, slowly at first and then in a rush, as if whoever was entering was determined not to be cowed. Headstrong, just like her mother. Amused, Sebastian rested the tip of his writing quill on the tabletop to watch an energetic, vivid figure hasten into the chamber.


Sebastian raised the quill and the spate of words instantly stopped. “Closer,” he commanded, when the creature remained still, glancing behind her at the closing door. “Look at me, girl.”


She took a step forward this time, halting exactly in the shadows cast between the torches and firelight so that her face and form remained hidden. Arrogant and stubborn, just like her father. A whip of irritation cracked down his spine.


“Artos, guard,” he ordered the black wolf he had saved as a cub from a hunter’s trap. Artos yawned, stretched himself up from the rug by the fire, and trotted to the threshold. With widening eyes the girl studied the wolf as it began a steady pacing back and forth before the entrance.


“He is not my familiar, if that is what you are thinking.”


“Your shadow, then.” The girl swung round to face him. Her voice was low, cracking a little from nerves or disuse. “He is handsome.”Unlike you. The unspoken words filled the chamber like the apple-wood smoke.


Sebastian pushed back his chair and strode toward his captive, circling his prize as she stood stiffly at attention, her head held perfectly straight, her hands clenched by her sides, half-hidden in her once gaudy, now tattered, green and gold robes. In the shifting alliances of these lush and rugged highlands her kindred had backed the wrong overlord and lost. In the scramble afterward between the northern princelings for booty and lands, Sebastian had been able to take the girl, claim her by right of revenge. Revenge. What a monster she must think me, this dainty youngster, to make her pay for ancient hurts her father wreaked on me, for the old betrayals of her mother. Does she even know that pitiful tale?


He circled her again, sensing her quiver as he loomed. She was a brunette, but there all similarity between them ended. Where he was tall and lean and intense, large-jointed and craggy, precise from years of deliberate, often hard-won control, this tiny girl shimmered like a flame. Where his hair was black, dull and fine as silk, hanging straight to his broad shoulders, hers was the color of brimstone and treacle, long, heavy ropes of shining curling waves, sunset brown shot through with chestnut. Her father’s coloring, and wasn’t Baldwin always aware of his good looks? As for her mother in her—Sebastian halted before the girl and, with a long finger, tipped up her chin, glimpsing a pair of bright brown eyes in a freckled, delicate face. The child shifted, lowering her head in a gesture of apparent submission. The shape of her eyes are the same as Rosemond’s, but not the color. Her mother had blue eyes and gold hair and smiled like a Madonna, all the better to beguile men.


“Like but not like,” Sebastian murmured, releasing his grip and continuing his prowl. The girl was easily a head shorter than himself, small and thin, where Rosemond had been tall and stately. “How old are you?”


“Eighteen.” The bright eyes fixed on his and a spark of heat tingled from his chest to his groin in response. He saw her blush and wondered if she had also sensed the spark. “Eighteen, Sir Sebastian.”


He scowled at her address, disliking the arrogant assumption behind it that only knights had value. Just like her father. “I am no knight, girl, remember that,” he barked. She trembled and he could not decide if that was due to fear or revulsion. Watching the pretty glow drop from her face like a fallen ribbon, he decided it was both.


Irritated and a little ashamed with his behavior, he closed his eyes, desperately trying to entomb his own past within himself. “Who would care for such a lanky thing as you?” His mother had first told him that. “Sallow, dark, possessive,” a previous lover or two had complained, before each one had parted with him due to his jealousy. “An ugly, crook-nosed brute...” Sebastian remembered that description only too clearly, the taunts “ugly” and “crook-nose” following him throughout his service as a page, then squire, before he had turned his back on the cruel, glittering world of chivalry. And who had first called him ugly and crook-nosed? Baldwin of course, this girl’s father, jibing and taunting, bullying and tormenting, setting on him with his friends and cronies, four, five, six against one. Sebastian had stomached that but then worse followed—he had heard Rosemond agreeing with Baldwin, the pair laughing together, laughing at him. After all I did for her and tried to do for her, after I helped her, after I told her I loved her.


Strange after all these years that it should still ache so much, as if an anvil had been hurled into his chest. Fighting the despair, Sebastian growled like Artos and shook his head to clear it. Here he was, aged three and thirty, still re-fighting old battles, old hurts. I am pathetic.


He opened his eyes, relaxing his grip on the quill before he shattered it.

Some would say Charlotte ‘Charlie’ Regan has it all. Beautiful, smart, athletic and a great job working as a journalist – in the almost exclusively male sports department. But Charlotte is not quite as sure as she seems. Recently split from her overbearing boyfriend, she escapes for weekends, surfing in the Atlantic, and spends her free nights watching sports, roaring at the TV.

Derry Cullinane is a fashion writer, gossip columnist and sophisticated man-about-town. The go-to guy for any woman seeking expert advice on what fabulous outfit to wear for any given occasion. He’s also tall, dark, good looking – and straight! So what’s the snag? He has a track record of dating glamorous, vain and shallow women.
Charlie gets an opportunity to write a new column under the pen name Side Swipe, but is soon drawn into a war of words and wit with a rival paper’s columnist The Squire – and their verbal fireworks get readers and editors talking. Yet neither Charlie nor Derry knows just whom the opponent is...

When Charlotte and Derry meet at the Races, the attraction is instant. As their relationship develops, so much more proves at stake, than protecting their alter egos. But a blunder puts Charlotte’s job in jeopardy just as Derry’s past makes front page, and Charlotte begins to doubt her feelings.


When Side Swipe and The Squire are finally forced to reveal themselves, will they revert to type – or confound everyone’s expectations?

‘You look great,’ Helen said.
‘You sure? I was just going to wear those black jeans. Thing is, I distinctly gave Derry the impression that I enjoyed fashion.’
‘Well, maybe if he’d given you a little more notice!’
‘Oh Helen, don’t start. He explained he got the tickets late and wasn’t pressuring me...’
‘Hmm, well so long as he’s not playing games. Don’t let him away with that.’
Charlotte rolled her eyes.
‘I'm serious,’ Helen said, ‘there’s a reason he’s in his mid-thirties and not in a long term relationship. Don’t let him mess you about.’
‘Relax, there’s no danger of that,’ Charlotte laughed. ‘I need a bit of fun in my life at the moment. I've no intention of falling heavily for this guy.’
Helen winked.
‘So you’re just using him for sex!’
‘Helen!’ Charlotte started to laugh. They both jumped when the doorbell rang.
‘I’ll get it,’ Helen offered, ‘you don’t want to look too eager!’
Charlotte started to hiccup.
‘Oh my God, Helen! Have you been learning off The Rules?’
‘If I’d been doing that, I’d have sorted my own love life out by now! Helen left Charlotte’s bedroom door open and a few moments later, she heard Derry’s deep voice in the hall, and Helen laughing.
She came downstairs. Derry stood in the hall, casually elegant in a dark suit and tailored shirt. He smiled broadly.
‘You look beautiful.’
Charlotte hiccupped loudly. Derry raised an amused eyebrow.
‘Um, sorry, I’m sure they’ll stop in a minute.’ Charlotte flushed. Okay Charlotte, stay calm. It’s only a second date. Derry escorted her to his car and opened the passenger door.
‘Have you seen this play before?’ Derry asked as he slid in behind the wheel.
‘No. Actually, I haven’t been to the theatre in ages,’ Charlotte confessed. ‘Sports journalist, remember? A hooligan who can spell.’

Posted by Lindsay Townsend at 10:32 3 comments: