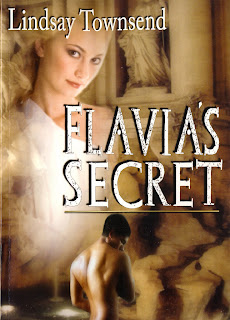 Here's a new excerpt of my historical romance, 'Flavia's Secret,' set in Roman Britain. In this excerpt, Flavia, a Celtic slave, is going shopping in Aquae Sulis (Roman Bath) with her new master Marcus.

On their way through Aquae Sulis, Flavia kept watching for another glimpse of Agrippina’s mysterious spice seller, but did not see the caped young woman again. Soon the wonders of the city itself were clamoring for her attention—she had rarely wandered in these fashionable parts, close to the great bath itself. Certainly not in the company of a man with whom she almost had to run to keep up: Marcus’ smooth, flowing stride covered a great deal of ground. Flavia trailed in his wake as he wove effortlessly through the close-packed buildings and the bobbing mass of tourists, grizzled soldiers and trinket sellers. She was breathless and over-awed when they came to the tailor’s shop, conscious of her shabby clothing and flyaway hair.

One of a block of three, the tailor’s was a smart establishment, built within sight of a three storey hotel and the great new barrel vaulted roof of the main baths. Set between a Gaulish wine shop on one side and a potter’s selling fine tableware on the other, it was roofed with tiles rather than the more common thatch, and was in two storeys with smooth plastered walls and large wooden shutters, now fully open.

Crossing in Marcus’ shadow to its open door and supercilious-looking owner, Flavia felt even more out of place. Around her, she could smell a heady swirl of perfumes as people came and went from the baths and hear the sound of sawing and the masons shouting to each other within the precincts of the shrine itself. There was always building going on in Aquae Sulis, ancient place of healing and now a Roman spa.

Telling herself that she would one day walk these cobbled streets as a free Celt, Flavia tilted up her chin, determined to show no nerves.


‘Flavia.’ Marcus had kept glancing round to check that she was with him and now he turned back to her, blocking the view of the bowing tailor. ‘Before we are overwhelmed by offers, we should have a plan of campaign.’

He grinned, making the ragged scar close to his lower lip disappear, making light, too, of his own words and laughing at himself.

She had done it again, missed a question. Perhaps it was his largeness, his maleness. She stared at the hand now clasping hers, her own palm dwarfed in his. ‘I don't know,’ she murmured, for something to say. A gust of wind cut through her patched dress, dragging several strands of Marcus’ glossy dark-brown hair across his forehead. Was it as tough and unyielding as it looked?

‘You are shivering, we must go in. But if no favorites, then a color you particularly dislike—surely you have that?’

‘Yes, imperial purple,’ Flavia said promptly, returning his look with a steadiness she did not quite feel.

He laughed aloud. ‘A pert reply! Very well, little Celt, your scruples will be respected. Come.’ He drew her into the shop with him.

That was a lovely extract, Lindsay!! I know Flavia might not consider herself lucky but.....

Thanks so much, Barbara. Marcus is, I confess, one of my favourite heroes.