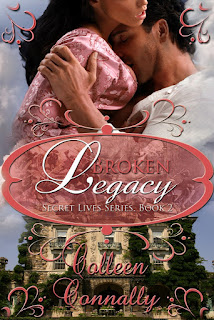 
Broken Legacy—Intrigue, Mystery and Romance.
Lord Gerard Lenister needed the lady…after their meeting, he wanted her.

For seventeen years Lady Eloise Granville lived in France thinking herself a bastard. Not until her life was threatened did her father cross the English Channel to reclaim her as his legitimate daughter. Now four years later a revolution roars its ugly head in France. Rumors abound of Lady Eloise’s life before her emergence in England…rumors that link her to the notorious leaders of the French Revolution.

Lord Gerard Lenister knows well the whispered connections Lady Eloise has across the Channel and the disdain that Society holds for the lady. It matters little to him. He could have cared less if she was the incarnation of a she-devil. He would marry Jezebel herself if she helped him on his mission. He is that desperate…but soon he discovers that Lady Eloise is not what she seems.
ABOUT
Thrown into the midst of the Reign of Terror that the French Revolution became, Eloise had long struggled with the questions arising from her birth. She had run from her past. Still, an air of mystery surrounds her. Forced into a marriage she neither wanted or desired, she finds herself drawn to the man who is now her husband. She commits herself to his mission and places her life in jeopardy for his cause.
Lord Gerard had put into place his plan to save his children. Marrying Lady Eloise would give him the leverage he needs to save them. He needed her connections...nothing more. Soon, he realizes the woman he married is nothing like the woman she had been portrayed. Gerard learns quickly not all is what it seems. Never did he consider she would risk her life not only for him, but his children as well nor did he consider that Eloise would evoke feelings within him he did not know existed.
Thrown into a terror few escape, Gerard and Eloise discover a connection that will bind their lives forever...love. But fate has intervened. Now, time is running out and Gerard is faced with a decision. A choice has to be made—his children or his wife.
Connect with Colleen Connally
Facebook- Novel Works
Twitter- Colleen Connally
Jerri Hines
Website-  Jerri Hines,Romance Author