Here is a new excerpt from my medieval novella, Bride for a Champion. In it, Simon and Alice are 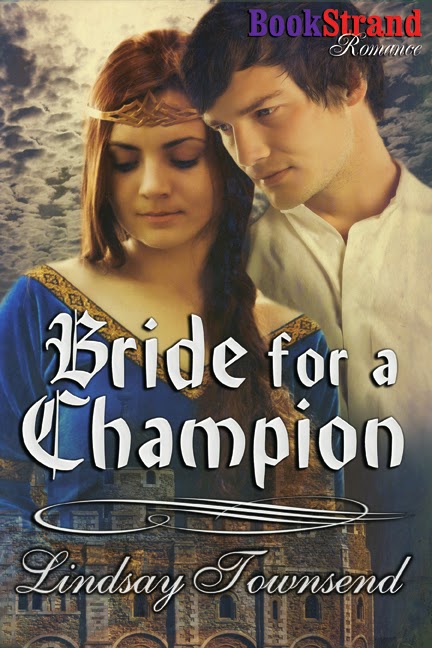 talking in the garden, wondering how to find and recover Alice's younger sister Henrietta, who is missing.


Still kneeling back on her heels, Alice punched the grass. “Exactly!”

Though her words and gesture were brave, he saw her tremble slightly. “Have you heard any word of your sister since Henrietta’s last letter?”

She nodded. “A man came from the king last month, with a scribe, to consider adding my name to a list of heiresses. At least, he said he was from the king,” she added doubtfully.

Simon felt a chill of suspicion. “Go on.”

“He mentioned my sister, said he had seen her at Christmas at the court of the old queen. I asked him about Edward.”

“You asked, rather than your father?”

She flushed and stared at a daisy to avoid looking at him. “Father would not speak of Henrietta. He said she was dead to him. I spoke to the herald alone.”

There was a tense silence between them, filled by the droning of a bumblebee. Staggered by what she had just admitted, Simon wondered what he would have done, had he been in her place. For Henry Martinswood to cast Henrietta aside was more than harsh, it was cruel.

After a moment, Alice sighed and went on. “The king’s man, if he was such, claimed he knew nothing of any Edward, but he half-smiled as he said it. I think he does know more, but he left the same day. A small, stocky man, with a smiling mouth and mean eyes. Sir Bohemond de Lyonesse.”

“That name I recognize, even from Constantinople!” Simon cracked his fists together, a sudden fizz of excitement coursing through his veins. “All Bohemonds are ambitious and he is no different, but soft as a copper spoon. King’s man or not, he will hang around the royal court still as such men always do. I will find him, persuade him to say more. I know de Lyonesse’s haunts of old, where he will have gone to ground.”

Her face began to drain of color again as she lifted her head to face him. “Do you think this Edward and Bohemond somehow acted together?”

“I have a name and a man to go after, which is all that matters.” Simon spoke heartily, although he suspected she might be right. Still, he did not want to alarm her any more, since she was already as pale as parchment. He changed the subject slightly.

“You say King John has a list of heiresses?”

“The king takes great notice of any wards or heiresses who might come into his care if or when their parents are dead.”

He looked at her still, wary face, guessed she disliked the King’s obsession, but dismissed it from his mind. No matter, since we are to be wed.

“Why not appeal to the king to find your sister?”

She gave an energetic shake of her head. “I think his terms would be too high. Besides—”

“You hope to avoid scandal and discover her first.”

Alice stared at the daisy again. “Of course.”

“And yet you see a man like Bohemond de Lyonesse alone, unattended, after all that has happened?”
He had been thinking of Greek maids, closely sequestered, that was the trouble, and he spoke again without thought. The instant the words were out he regretted them, but it was too late.

“No!” She was already on her feet, spitting her denial. “You gull me into a confidence, into speaking with you freely and then you scold! That is unfair!”

As Alice spoke she was moving, but so was he. When she stumbled at the very start of her headlong dash back up the garden, he caught her, clutching her tight. He was afraid for an instant that she would fall flat on her face in her haste to escape him.

She squirmed in his grip, as fast and furious as an angry falcon bobbing and bating on a hunter’s wrist, struggling with its jesses. “Release me, raptor!”

The insult burned him—he who had seen so many women raped and murdered at the fall of Constantinople and been unable to save them. “I am none such,” he began, through gritted teeth, breaking off as he felt her attempting to unwind his fingers off her waist.

Almost as if she sensed his attention she stopped at once and looked straight into his face, her eyes as bright as eastern jade. “If you were a true gentleman, you would let me go.”

Without a flicker, she returned, “As a Christian, you should not treat me so rudely.”

What did she know of what one Christian might do to another? But he would not back down. If he was to marry this salamander then she must learn, and the lesson would begin now, whether he stank of horse or not.

He tightened his grip around her narrow waist, crossing his hands in the small of her back. As he inhaled her lavender scent and felt her lissome body mold against his, he was dimly aware of her standing up on her tip-toes. Before he realized what she was about, she had kissed him first.

He was so startled by the sudden tender sweetness of her mouth that he sighed, bringing a hand up now to smooth a tendril of her hair away from her sun-warmed cheek. She tasted of sugar cone and honey and, he fancied, cherries, although that might only be wishful thinking.

Her kiss went on, slow and sure, an instant of gentleness when he had known few such moments in his life, glowing in his mind like a rare flower or book. Her eyes were closed as she gave herself in her kiss and he closed his eyes, too, relishing the contact where their breaths mingled and their lips touched and touched and touched…

“Women can also kiss,” she murmured.

“I know.” He enjoyed the quiver her mouth made against his as they conversed in this unusual fashion. “Is this because you like me, or because you wish to be first?”

He felt rather than heard her laugh. “Too late for you to discover,” she teased. She started to step back, float off like a scrap of thistledown, but he was a fighter with a warrior’s swiftness and reactions and he gathered her back before she was gone. “I do not think so,” he answered, and he kissed her again.

Alice fought herself. She strove to remember her sister, to escape from this heady world of sensation, where she felt higher than the clouds. She had anticipated Simon’s kiss and intercepted it, bested it, but now she was losing. He had trapped her when she had expected to escape. Time and the world had stopped for her while she hung in his arms.

Foolish! Her mind raged, but how could she have known? She had never kissed a man before, not as couples kiss.

His tanned nose bumped lightly against hers and she felt him smile. Simon had not kissed often before, she sensed that and was pleased, but she had no chance to consider why that should be so, because his kiss deepened.

Simon growled something in Greek, his grip tightening on her a moment before he set her back lightly on the path. “More later, eh?” he murmured, touching her shoulder. Then he bowed, turned and ran back toward the steps and the tanned blond messenger, calling, “What news, Alexios?”