Famous Five Plus: TAKE A BOOK TO THE BEACH

Famous Five Plus: TAKE A BOOK TO THE BEACH: If you’re packing for your holidays don’t forget to include your summer reading. There’s a great selection to choose from on the Famou...
Posted by Lizzie Lamb at 10:46 No comments:

Extract The Captain and The Countess


Rosemary Morris’s most recent novel The Captain and the Countess has received 5* reviews and is available as an e-book for 77p from www.amazon.co.uk and for $0.99 from https://museituppublishing.com until midnight on the 17th August.


Exract fromThe Captain and The Countess


Edward, the Right Honourable Captain Howard, dressed in blue and white, which some of the officers in Queen Anne’s navy favoured, strode into Mrs Radcliffe’s spacious house near St James Park.


Perkins, his godmother’s butler, took his hat and cloak. “Madam wants you to join her immediately.”


Instead of going upstairs to the rooms his godmother had provided for him during his spell on half pay—the result of a dispute with a senior officer—Edward entered the salon. He sighed. When would his sixty-one year old godmother accept that at the age of twenty-two he was not yet ready to wed?


He made his way across the elegant, many windowed room through a crowd of expensively garbed callers.


When Frances Radcliffe noticed him, she turned to the pretty young lady seated beside her. “Mistress Martyn, allow me to introduce you to my godson, Captain Howard.”


Blushes stained Mistress Martyn’s cheeks as she stood to make her curtsey.


Edward bowed, indifferent to yet another of his grandmother’s protégées. Conversation ceased. All eyes focussed on the threshold.


Edward turned. He gazed without blinking at the acclaimed beauty, whose sobriquet was ‘The Fatal Widow’.


The countess remained in the doorway, her cool blue eyes speculative.


Edward whistled low. Could her shocking reputation be no more than tittle-tattle? His artist’s eyes observed her. Rumour did not lie about her Saxon beauty.


Her ladyship was not a slave to fashion. She did not wear a wig, and her hair was not curled and stiffened with sugar water. Instead, her flaxen plaits were wound around the crown of her head to form a coronet. The style suited her. So did the latest fashion, an outrageous wisp of a lace cap, which replaced the tall, fan-shaped fontage most ladies continued to wear perched on their heads.


Did the countess have the devil-may-care attitude gossips attributed to her?  If she did, it explained why some respectable members of society shunned her. Indeed, if Lady Sinclair were not the granddaughter of his godmother’s deceased friend, she might not be received in this house.


The lady’s fair charms did not entirely explain what drew many gallants to her side. After all, there were several younger beauties present that the gentlemen did not flock around so avidly.


He advanced toward the countess, conscious of the sound of his footsteps on the wooden floor, the muted noise of coaches and drays through the closed windows and, from the fireplace, the crackle of burning logs which relieved the chill of early spring.


The buzz of conversation resumed. Her ladyship scrutinised him. Did she approve of his appearance? A smile curved her heart-shaped mouth. He repressed his amusement. Edward suspected the widow’s rosy lips owed more to artifice than nature.


“How do you do, sir,” she said when he stood before her. “I think we have not met previously. Her eyes assessed him dispassionately. My name is Sinclair, Katherine Sinclair. I dislike formality. You may call me Kate.”


“Captain Howard at your service, Countess.” Shocked but amused by boldness more suited to a tavern wench than a great lady, Edward paid homage with a low bow before he spoke again. “Despite your permission, I am not presumptuous enough to call you Kate, yet I shall say that had we already met, I would remember you.”


“You are gallant, sir, but you are young to have achieved so high a rank in Her Majesty’s navy.”


“An unexpected promotion earned in battle which the navy did not subsequently commute.”


“You are to be congratulated on what, I can only assume, were acts of bravery.”


The depths of her ladyship’s sapphire cross and earrings blazed, matching his sudden fierce desire.


Kate, some four inches shorter than Edward, looked up at him.


He leaned forward. The customary greeting of a kiss on her lips lingered longer than etiquette dictated. Her eyes widened before she permitted him to lead her across the room to the sopha on which his godmother sat with Mistress Martyn.


With a hint of amusement in her eyes, Kate regarded Mrs Radcliffe. “My apologies, madam, I suspect my visit is untimely.”


Her melodious voice sent shivers up and down his spine, nevertheless, Edward laughed. Had the countess guessed his godmother, who enjoyed match-making, wanted him to marry Mistress Martyn? No, he was being too fanciful. How could she have guessed?


“You are most welcome, Lady Sinclair.  Please take a seat and partake of a glass of cherry ratafia.” said.


“Captain, you read my mind, sweet wine is not to my taste.”


In response to the lady’s provocative smile, heat seared his cheeks.


Kate smoothed the gleaming folds of her turquoise blue silk gown. The lady knew how to dress to make the utmost of her natural beauty. Her gown and petticoat, not to mention sleeves and under-sleeves, as well as her bodice and stays, relied for effect on simple design and fine fabrics. He approved of her ensemble, the elegance of which did not depend on either a riot of colours or a multitude of bows and other trimmings. Later, he would sketch her from memory.


Kate inclined her head to his godmother. “Will you not warn your godson I am unsound, wild, and a bad influence on the young?”


Edward gazed into Kate’s eyes.  Before his demise, had her husband banished her to a manor deep in the country? If it was true, why did he do so?


Kate’s eyebrows slanted down at the inner corners. She stared back at him.  He laughed, raised her hands to his lips and kissed each in turn. “I look forward to furthering my acquaintance with you.”


What did he care if she were some ten years his elder? He wanted to get to know her better. Edward bowed. “Your slightest wish is my command.”


…. A frozen glimpse of despair deep in her eyes unsettled Edward. Did he imagine it? He could not speak. Why should a lady like the countess despair?

Strange Tales: To Plan Or Not To Plan? a guest post by Sue Moorcr...

Strange Tales: To Plan Or Not To Plan? a guest post by Sue Moorcr...: To mark the publication of her latest novel, the wonderful "The Wedding Proposal", here's a guest post from my good friend (an...
Posted by Sue Moorcroft at 16:30 No comments:

Out Now! The Silk Tie by Lily Harlem

"If you enjoyed The Glass Knot, you'll LOVE The Silk Tie!" 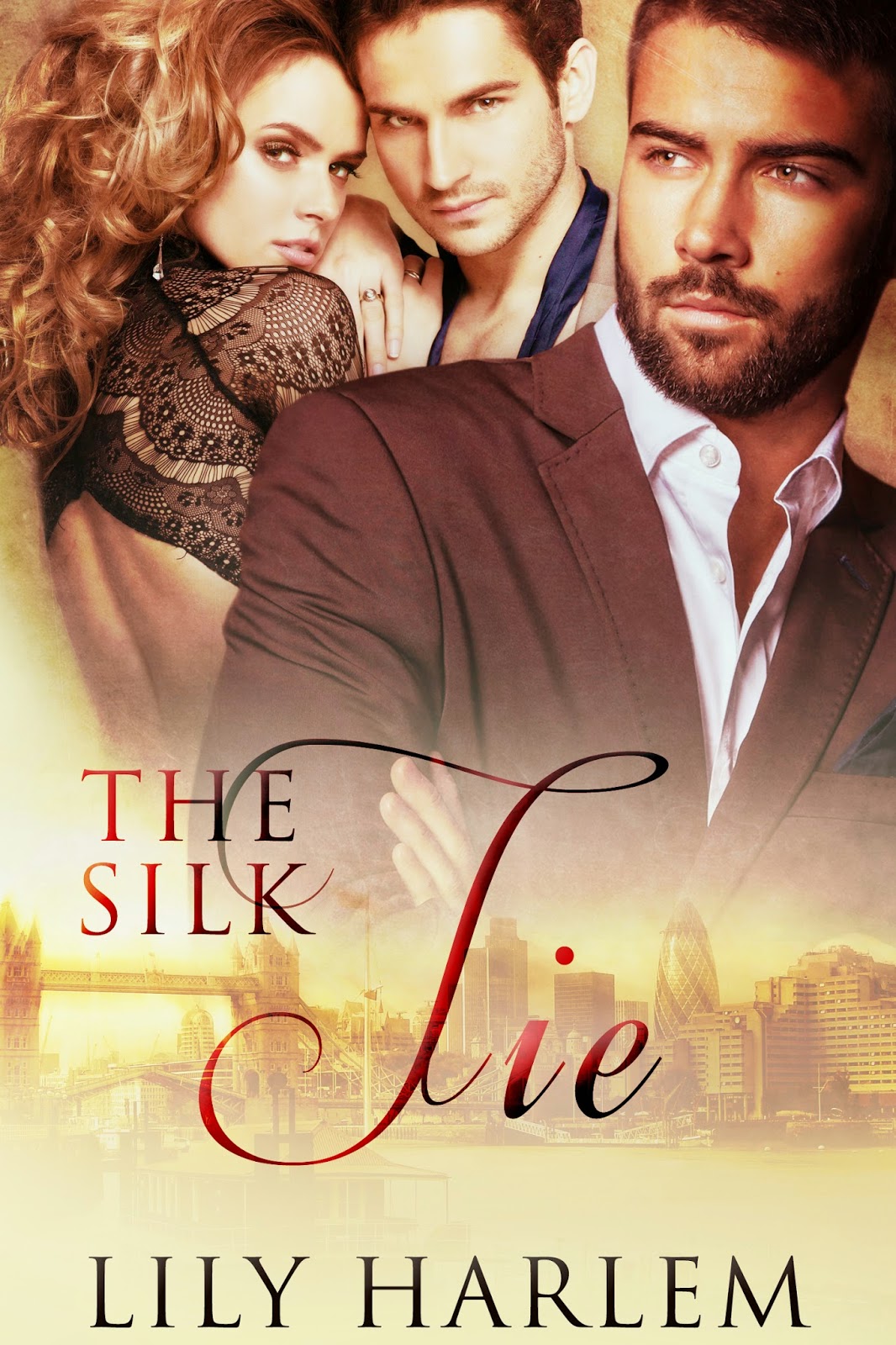 Professional life in the City of London is tough going which is why my husband Gabe and I live by the motto work hard and play hard. So when something, or rather someone, comes along that changes how he wants to play I’m intrigued by our sexy new game.

But there's always private sides to the ones you love, and in this case new thoughts and desires are stealing Gabe’s dreams. It’s not until I meet Brent—gorgeous and sophisticated yet soul-achingly alone—that I begin to understand the complex layers of Gabe’s needs and exactly what I have to do.

But I’m not afraid; in fact the idea of two men turns me the hell on. In a whirlwind of romance, fear, desire and a new cresting wave of passion we open up to each other, testing the water for one weekend only. Or is it? Will we ever be the same again? Can Gabe and I survive our decision to let a third into our bed? Can Brent just walk away and, more importantly, will we let him?

The Silk Tie is related to The Glass Knot by its menage a trois theme only. It doesn't matter if you only read one or the other, but if you fancy getting your hands on The Glass Knot here are the details. 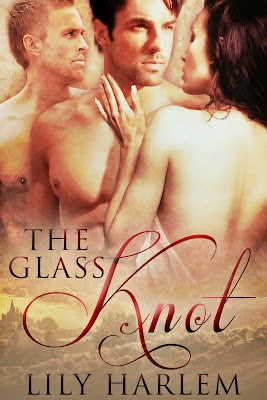 What’s a girl to do when the guy she falls for is married to another man?

This is exactly what happened to me. Seeing Josh Kendal stroll out of the Mediterranean Sea wearing tight navy swim trunks and looking like a hot new James Bond was a truly delicious moment. Catching sight of his wedding ring was like a kick in the shin and meeting his gorgeous husband, phew, that was enough to make any girl groan at the cruel joke God was playing on her.

But all was not as it seemed, and when Josh needed a woman to sort out a ‘delicate predicament’ I was the one for the job – heck, what did I have to lose? Certainly not as much as him, literally.

Trouble is, emotions always get tangled, loyalties can’t help but be divided and with a night of memories so hot they'd have the devil sweating, there was only one thing for it—it was time to get honest, fight for what I wanted despite society’s constraints and open my heart to the people it needed most.