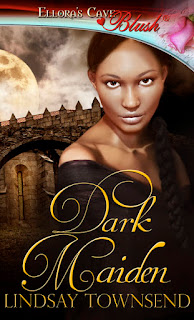 As is now being discovered, there were people of African descent living and working in Britain, especially in cities and ports like York. Archaeology discovered a Romano-British grave in York where a woman of black African and mixed race heritage had been buried in a rich tomb with grave goods. Archaeology also uncovered a tomb of a man of north African descent buried at a medieval friary in Suffolk, England, close to the port of Ipswich. According to bone specialists he had a bad back! The thirteenth century statue of Saint Maurice in Magdeburg cathedral in Germany clearly shows him as African.

Half-African, half-English, Yolande is the dark maiden of the title, a spiritual wanderer and warrior, helping those tormented by the restless dead and assisting the restless dead themselves to find final peace. She lives and works in England during the time of the Black Death.

I chose this time period quite carefully. Women during the Middle Ages could not be priests but during the period of the Black Death, when thousands died, including hundreds of priests, the church allowed women to take confessions from dying people. In early 1349 the bishop of Bath and Wells wrote to his priests to encourage all men to confess, before they were taken by the pestilence. He added that if they had no priest they should follow the teaching of the Apostles and confess to each other 'or, if no man is present, even to a woman'.  (From translation in Philip Zeigler, The Black Death, page 125).

Medieval people also believed that in a crisis anyone, priest or lay person, could perform an exorcism because every Christian has the power to command demons and drive them away in the name of Christ.  I took these ideas and developed them, allowing my Yolande to become an exorcist.

In 'Dark Maiden' I have Yolande and Geraint  (a travelling player who becomes her friend, help-mate, lover and finally husband) face several encounters with both restless spirits and also demons. My ideas have always been shaped by the real beliefs of the time. So in 'Dark Maiden' there are evil spirits, restless ghosts called revenants, an incubus and vampires - all paranormal creatures with a medieval slant.

I'll talk about these in other blog articles.

Ditto, Rosemary - that's just what I was going to say!! Really intriguing, Lindsay.

Thanks, Rosemary! Thanks, Barbara!