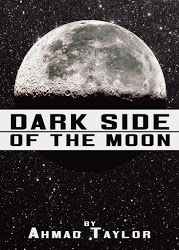 The Dark Side of the Moon
by Ahmad Taylor

This is a piece of speculative fiction terrifyingly close to reality, of a ‘science fiction horror type of science experiment’. It is futuristic indeed, cruiser shuttles and all, but for me has the feeling of next-door-but-one and the-day-after tomorrow.

The plot centres round a family group, Mr Thomas Senior, son Derrick and daughter Jeanie, who are all employed in the network of top secret operations. Father wants to guide and influence both son and daughter; he carefully keeps each of them unaware of his dealings with the other. He is especially severe with Jeanie in training her as a secret agent, and she becomes highly skilled in unarmed combat. Derrick initially acts as Jeanie’s chaperone.

There has been a project for food cultivation on Mars to solve the world’s nutrition problems. This had foundered because its secret code had been cracked by hostile powers, and so became known as ‘The Mars Fiasco’, and went into abeyance. Through his father, Derrick discovered that “ARCA was a private firm specializing in design and development projects for the government. This, of course, was what the general public was told about the company. But among government communities ARCA was a clandestine organization, responsible for classified government projects such as the infamous Mars Project. The Advanced Research and Command Authority (ARCA) was established decades ago by the government to run its secret research and development projects . . . ARCA was directly responsible for the creation of the Global Sustenance Production and Distribution Program (GSPDP) currently in use.” There is a project to grow food on the moon – hence the title.

His Father wants Derrick to find confidential information about a current M.A.R.S. project, with the help of his server, which he passes on to Derrick, who knows the password.

One concomitant of the scheme is a vicious programme of experimentation on the brain    tissues of the operatives, many of whom have been selected from Top Security Prisons. “The idea was that if you could provide significant stimulation to the both the brain and muscles, the body would simply reboot like a computer, and you could get both to turn back on simultaneously.” The motivation was to ‘rehabilitate comatose patients’. Derrick undertakes a cross-examination of the Doctor in charge of the scheme, who is forced to admit its essential criminality, but has to resort to the usual plea of acting under orders. “Once these individuals were deemed as appropriate an agent was introduced into their circulatory systems, which would facilitate the necessary state of cognitive debilitation.” They were then forced into ‘simulated interactions with the real world.’

Derrick’s pursuit of the truth is brutally relentless. At no point in the story does the pace of narrative slacken. Most of the action is taken up with ruthless attempts to extort information; to little avail. Derrick finally becomes a victim, to be drugged into the new identity of Mickot Shrader. The narrative ends with him falling unconscious.

For my preference, it is a bit over-sanguinary; too many deaths and mutilations; but this is probably in keeping with contemporary taste.

Interesting review Ahmad. The reader was obviously stirred by your novel. Loved the last bit about sanguinary. At first the word brought to mind sweet, then he said bloody. lol I guess he meant it literally. :) well done.