This is not a story about a murder, but a dark journey inside a writer's mind.  Commitment-shy Ellis Crawford, creator of the famous and highly successful Jenna Crane mystery series, finds his comfortable life swept away when he meets Emily, his perfect woman.

Despite his deepening love for Emily, Ellis finds himself haunted by painful memories of a previous love whose heart he broke, and begins to regret his past behaviour.  On top of that, Emily wants him to kill off his beloved heroine Jenna Crane - against fierce public opinion.

But life is too short for regrets and when his own rapidly spirals out of control, taking his reputation as an author with it, where will Ellis turn for help? 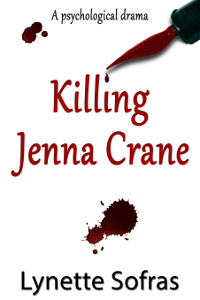 From Sholcc: "Try it, you'll be hooked"

The latest novel from the increasingly successful Lynette Sofras is a bit of a departure from the contemporary romance which has been her trademark style up to now. Killing Jenna Crane is a psychological romance with a twist of suspense which keeps the reader hooked from the first page. The central character, the writer Ellis Crawford, is a modern man with a contemptuous view of women which is crying out for correction (at least from the viewpoint of this female reader!) and he certainly gets his comeuppance but not at all in the way readers might expect - which is where the skill in plot construction shows very clearly. Despite his flaws Ellis is the kind of man readers can relate to and understand because he is very human and knows his own faults, even if he chooses not to correct them until later in the novel. The other characters are well drawn, especially the two women who offer him a tantalising glimpse of a loving future but who are effectively contrasted to show Ellis two very different options to choose from. Family tensions and essential background details are skilfully interwoven into the narrative so that they never become intrusive but provide realistic psychological triggers for the actions of the characters; the scene where Ellis makes a disastrous appearance on a breakfast television show is comic in itself but even funnier viewed in retrospect when the reasons for his behaviour are explained.
I am reluctant to explain too much about the plot so as not to spoil the ending. However I definitely suggest that you read Killing Jenna Crane if you are looking for strong, imaginative writing which hooks you in and leads you inexorably to a satisfying but unexpected conclusion. The writer's experience in narrative construction and stylish writing are demonstrated on every page; it is a tribute to Sofras' skill that the masculine viewpoint is totally convincing, while the plot-line will satisfy the romantic aspirations of the majority of women readers. This is a feat which has been pulled off brilliantly in the novel and which makes it a good place to start if you have never heard of Lynette Sofras before. I don't think this will be the last of her books that you want to read, once you have sampled the work of this talented and engaging author.

From Jenny Twist: "An Author to Watch Out For"

When novelist Ellis Crawford meets the girl of his dreams, the beautiful, utterly perfect Emily, he is prepared to do anything for her. And I mean anything. He is even prepared to kill Jenna Crane. Not that Jenna Crane is a real person, exactly. She is a figment of his imagination, the popular heroine of his highly successful series.
He abandons his old friends and for the first time in his life is ready to commit to one woman. Why then does his life begin to dip dangerously out of control?

Fans of Lynette Sofras may be surprised by this story. All her novels are more than just romance, but this one is even more. It is as much a novel of psychological suspense as a love story, and it takes you deep into the mind of a haunted man.

I think it is her best yet. Beautifully-written, as I have come to expect from this author, with superb characterisation. But what makes it stand out is the sheer originality of the plot.

Lynette Sofras is definitely an author to watch out for.

Read four more 5* reviews on amazon.com
Posted by ManicScribbler at 08:00

Nice reviews. It's going to go in my TBR stack Lynette. I'm a huge fan of psychological jaunts into the mind. Best luck with it.

Thank you so much Rose and Barbara. I've been feeling so nervous about my genre-shift, so I really appreciate your encouraging words. ♥