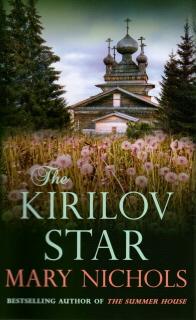 I was thrilled to have my novel, THE KIRILOV STAR, published by Allison and Busby, shortlisted for the historical category of the Romantic Novelists’ Association annual RoNA Award. The winners of each category will be announced at a special event in London on 26th February, and those will be put forward for the overall Romantic Novel of the Year to be announced in May.

I have been fascinated by Russian history ever since I read the Russian classics at school (in English I hasten to add) especially the assassination of Tsar Nicholas and his family and the widespread belief that the Grand Duchess Anastasia had survived, which has since been disproved. The Kirilov Star is a book I have wanted to write for a long time, but hesitated doing. Its synopsis lay in a drawer for years while I concentrated on other things. But then I decided if I didn’t go ahead and write it, I never would. I am glad I did.

This is what Julie Bonelli wrote about it:

The dark clouds of war had changed four year old Lydia Kirillova’s life forever. A distant relative of the Romanovs, Lydia and her family had once led a life of luxury and opulence, but now their every waking thought is consumed by fear and danger. When the lives of Lydia’s entire family are claimed by this destructive war, the four year old child is heartbroken, vulnerable and all alone in a world where peril lurks round every corner. At the mercy of strangers and still mourning her family, Lydia’s plight touches the heart of childless diplomat, Sir Edward Stoneleigh, who adopts the child and takes her to England with him. Although Sir Edward’s wife was initially reluctant to accept Lydia into her house as she thought her the product of a liaison her husband had had whilst in Russia, she soon grows fond of the orphan and welcomes her into her home and her heart.

Lydia might have grown up as the Stoneleighs’ much loved adopted daughter, but she’s never forgotten her Russian roots. She still cannot forget the day her parents and her brother had been brutally murdered in front of her eyes nor can she stop herself from wanting to discover the truth about her heritage. Whilst on holiday in Paris with her parents, Lydia encounters a charming Russian poet called Nikolay Andropov whom she finds herself falling head over heels in love with. She soon embarks on an ill-advised relationship with Nikolay who manages to turn her head with his talk of rebellion and revolution. Lydia is well aware that her parents do not approve of Nikolay, but he’s the first person who understands her yearning to find out more about her family and her past, so when he offers her the opportunity to accompany him on a trip to Russia, she jumps at the chance and leaves England behind to start a new life in the country that holds the key to the questions that have dominated her life.

But on her arrival in Russia, Lydia soon realizes that the idyllic homecoming which she’s spent most of her life imagining is a mere fantasy that bears no resemblance to the horror and devastation that surrounds her. With the Second World War looming and Nikolay proving to be a ruthless cold-hearted bully who had been using her, Lydia is once again fighting for survival.

Will Lydia find the courage to triumph against all the obstacles being thrown her way? Or will she lose everything all over again?

Mary Nichols is an outstanding writer of historical fiction who never fails to bring the past vividly to life and in The Kirilov Star, this terrific storyteller has penned a poignant, compelling and wonderfully evocative tale of powerful secrets, devastating deception and the redemptive power of love that will keep readers on the edge of their seats and turning the pages late into the night.

With wonderfully nuanced characters that leap off the pages, heart-stopping twists and turns and captivating emotional drama that will have readers reaching for their tissues, The Kirilov Star is a first-class historical saga from the wonderful Mary Nichols.
Posted by Lindsay Townsend at 08:00

Congratulations, Mary!!! What a thrill.

Congratulations, Mary, on being shortlisted as well as the great reviews.