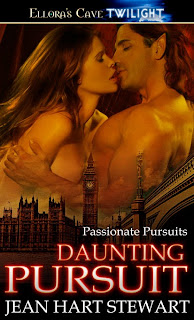 Can't seem to drag this cover to where I want it, but Dangerous is set in the London of 1934 and Daunting in 1949. Three more to go in this series of a story of  sexy, long haired elves with pointed ears. All are based on the times of that era, and are factually correct in the historical aspect. What the gorgeous elves do can't be proven as factual, but is fun.

These are erotica, but I'll pick a toned down excerpt from Daunting, newly released from Ellora's Cave.


"Jane kept her head down as they walked. The two gorgeous elves, so alike in looks except for their hair, had shaken her to speechlessness. Garth’s beautiful golden tresses were perhaps more eye-catching but she preferred Ben’s brown with myriad golden streaks. Not only his hair but his aristocratic features, his powerful body, everything about him somehow seemed to her to proclaim his honorable steadiness. Garth was as handsome, she imagined some might find him more handsome. But to her he was an unknown quantity. She knew, she simply knew, Ben would never break his word or shirk a duty.


She’d been wrong to shun him as she had. He at least deserved to know the truth, and to know it from her. If he hated her afterward, at least she’d have been honest. Deep in her heart she prayed he would accept the facts as they were.


He’d said he was her mate. True or not, he wouldn’t ever tolerate hiding the facts or, worse yet, not acknowledging the truth to one’s self and one’s love. She feared he was indeed her love, even though she couldn’t have him. She led him to the same room they’d used for her first experience in loving, and where she’d lied to him.


That he was her love she had no doubt. She’d tried to ignore him but night after night he’d invaded her dreams as her unruly mind replayed every passionate move he’d made. She’d fought it, lord knows she’d fought, but she couldn’t escape the knowledge she loved him with all of her being.


He opened the door to the same room where they’d had so much pleasure and followed her in. This time they found a comfortable-looking arm chair in the corner, with bright flowered upholstery and soft-looking cushions. Surprised, she turned to him.


“That wasn’t here before.”


Ben smiled one of his knowing-a-secret smiles. “I’m sure it’s courtesy of Vale.”


She looked baffled but motioned him to the chair. She started to perch on the desk when he grinned and pulled her over to sit on his lap. Wrapping his arms firmly around her, he made it plain she wouldn’t escape for while. Smoothing back her hair, he kissed her forehead. 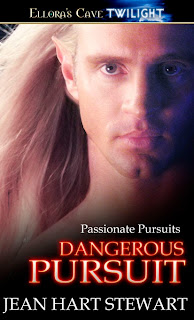 “Now, love. Tell me your big dark secrets.”
My books are at Ellora's Cave, Amazon, etc. and I can be found on Facebook, Twitter, blogs and plus and of course on my own website. www.jeanhartstewart.com. Love to chat with you any time.
Posted by jean hart stewart at 01:00

At least we'd know an elf if we saw one - well assuming their ears were pointed!!! Congrats on the release.

Thanks, Barbara... you'd definitely know them. That hair to their shoulders is another clue!