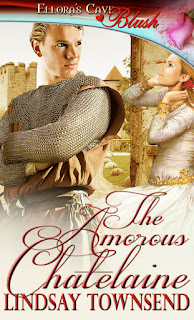 My mainstream medieval historical romance The Amorous Chatelaine is out today. This was written for Ellora’s Cave Blush Line, so love scenes are not graphic.You can read the blurb and excerpt here.


Sir Robert is neither young nor green. He is hardened by battle and tempered by the vagaries of life. He is also rough and unrefined—completely lacking in manners, sophistication or any of the qualities Lady de Barri values. But his arms are strong, his face is handsome and his heart is as bright and gold as the sun at noon. A heart he gives unreservedly to Lady de Barri.

He crashed through the elder bushes and hazels toward her, limping slightly on his left leg. Emma knotted her cloak more securely around her middle and strolled out of the river, aware the blue silk hid and also displayed her form as the soft cloth clung and molded to her shape. Mary began to fuss with her hair but with a brief shake of her head, Emma told the maid to leave it. Men were often bedazzled by her unruly hair and this looming knight looked no different. As ever, she would play what advantage she had to the hilt and make him wholly hers.
If she wanted him. Standing on a sun-warmed stone, her land secure beneath her, Emma considered this latest knight.
“Sir Robert without lands,” Stephen had called him, a younger son and a “sturdy fellow in a fight.” Stephen said he would ask the knight to visit her if she gave him leave, which she had. “I vow he will benefit from your instruction,” Stephen had told her, but seeing the man, Emma was less sure.
Robert was certainly handsome, as a lion or wildcat is handsome—muscled and deadly, predatory in all his movements—but so far as she could tell, entirely without courtly charm. He spat and cursed and was far too careless in his appearance. True, she had learned from old Agatha and young Jack that he was protective and kind in a rough, natural sort of way, but was that enough? He was much older than the usual young bloods who flocked to her castle.
A challenge. I relish a challenge, but will he heed me? Will he improve upon greater acquaintance or has he no nonmartial virtues? Will he be willing to learn any?
“What a mud man,” Mary breathed beside her, clearly caught between admiration and censure.
Emma nodded, experiencing the same giddy spiral of emotion. At a distance, ungallant or not, Sir Robert was tall and well-favored, with bright blond hair, a strong jaw and chin and piercing eyes. Dark-blue they were, of a rich color she had often wished to have herself instead of her own washed-out tawny brown.
As he came closer, Robert delighted and confounded in equal measure. His mouth was generous and full but his shave indifferent. His eyes were lustrous, secret pools for a woman to lose her heart in, thickly lashed in gold, but his attention was fixed on her hair, not her face.
Sinewy, powerful, athletic—Robert was all these, but his dress was a disaster. His green tunic may have been clean sometime but he had not attempted to remove the muddy footprint in the center of his chest, nor the streams of pollen smeared across his broad shoulders.
A natural gentleman, perhaps, or lazy and arrogant? Undecided, she prepared to say the usual words of welcome, but he spoke first.
“My horse is tethered on the hillside above. Will one of your people tend him, please?”
“Of course.” Emma readied herself a second time but then, as they truly looked at each other, a tide of heat surged through her. Robert’s eyes, lightened with humor, clearly admired her even as they studied her. He watched her quite as closely as she did him and, worse, he seemed amused.
Sure of her complete attention, he halted a sword’s length from her and snapped a brief bow. “Do you bathe like this to test or tease, my lady? I presume this is another test. Did I pass?”
“For shame!” cried Mary, while Emma experienced a pang of mingled relief and regret. Wit and word-sparring were all part of the courtly game, but she had hoped for more originality and perhaps even some genuine emotion from this knight. Still, his question was a kind of compliment and she was happy to reply.
“Would you be sorry if I said not?”
“Will you be angry if I say I do not care one way or t’other?”
A hit for him, perhaps, but she was not finished yet. “Do you like to win, sir?”
“I would be a poor knight if I did not.”
“And do you win for yourself or for a lady?”
“Both, if I can, but I am my own master.” Sir Robert then belied his seeming boast by asking, “So have I failed?”
“Believe what you will, sir,” said Emma crisply. “To answer your first question, this part of the river is a favorite of mine and other knights have entered my lands by way of the proper road, off to the south of here. You could have taken it after your…encounters with my people.”
He rolled his magnificent shoulders in a shrug. “I prefer the older tracks. Such are better for my horse.”
Laconic but truthful, she guessed. Her silk cloak clinging slightly, she turned east, toward the distant turrets of her castle. “Taking a less trodden route could be seen as hostile.”
“Not by the Lady de Barri, surely? I have heard it said you can disable whole armies with a smile.”

This is my second historical romance novella from Ellora's Cave. My first, 'The Lord and Eleanor,' you can read about here.