Guest post: Mary Nichols - 'The Girl on the Beach' 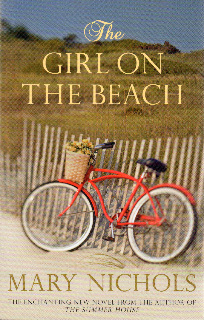 A week-old baby is left on the doorstep of the Coram Foundling hospital on a Monday in July 1918.  There is a note pinned to her blanket:  'Husband killed in France.  Can't cope no more.'  No one knows her name and so the administrators of the charity call her Julie Monday.
On a day trip to the seaside when she is eight she meets eleven-year-old Harry Walker and they spend an hour or two chatting but she must go back to the orphanage and he to his family. Ten years later they meet again and are married in 1938. Their son, George is born in spring 1939. When war is declared Harry enlists in the Royal Air Force and is sent to Canada for training, leaving Julie to cope with her baby in wartime London.
When the siren sounds for the first big raid of the London blitz, Julie is on her way home, having left George with a friend. She is ushered into a shelter which receives a direct hit. Pulled out alive but injured, she cannot remember how she got there. She does not know who she is and has lost her bag containing her identification. At the hospital to which she is taken, she is given a new identity. She must make a new life for herself as Eve Seaton, but can she?

Available from www.allisonandbusby.com, Amazon, or from all good bookshops.

More details from www.marynichols.co.uk
Posted by Lindsay Townsend at 08:00

Great excerpt... I loved it.