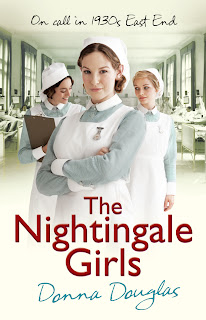 In the autumn of 1934, three very different girls sign up as trainee nurses at The Nightingale Hospital in London’s East End.

Tough working class girl Dora is hoping for a better life for herself, away from the clutches of her evil stepfather. But she faces a different kind of hardship as she finds herself up against the snobbery of her fellow students.

Helen has grown up doing everything her overbearing mother expected of her – including becoming a nurse at the Nightingale. But her life is changed when she falls in love with a very unsuitable young man. Can she finally find the courage to stand up to the formidable Mrs Tremayne?

Reluctant debutante Millie has everything she wants in life – except freedom. Becoming a nurse is her last chance at independence. But she soon finds that life on the wards is tougher than she’d ever imagined.
Through bedpans and broken hearts, the girls form an unlikely friendship. But which of them has what it takes to become a Nightingale Girl?


EXCERPT from Chapter One:


“Tell me, Miss Doyle. What makes you think you could ever be a nurse here?”

After growing up in the slums of Bethnal Green, not much frightened Dora Doyle. But her stomach was fluttering with nerves as she faced the matron of the Nightingale Teaching Hospital in her office on that warm September afternoon. She sat tall and upright behind a heavy mahogany desk, an imposing figure in black, her face framed by an elaborate white headdress, grey eyes fixed expectantly on Dora.

Dora wiped her damp palms on her skirt. She was sweating inside her coat, but she didn’t dare take it off in case Matron noticed the frayed cuffs of her blouse.

“Well – “  she began, then stopped. Why did she think she could ever be a nurse? Living on the other side of Victoria Park from the Nightingale, she had often seen the young women coming and going through the gates, dressed in their red-lined cloaks. For as long as she could remember she’d dreamed of being one of them.

But dreams like that didn’t come true for the likes of Dora Doyle. Like any other East End girl, her destiny lay in the sweatshops or one of the factories that lined the overcrowded stretch of the Thames.

So she’d left school at fourteen to earn her living at Gold’s Garments, and tried to make the best of it. But the dream hadn’t gone away. It grew bigger and bigger inside her, until four years later she had taken her courage in her hands and written a letter of application.

“What have you got to lose?” Mr Gold’s daughter Esther had said. “You’ll never know if you don’t try, bubele.” She’d even lent Dora her lucky necklace charm to wear for the interview. She could feel the warm metal sticking to her damp skin beneath her blouse.

“It’s a hamsa,” Esther had explained, as Dora admired the exquisite little silver hand on its delicate chain. “My people believe it brings good fortune.”

Dora hoped the hamsa’s powers weren’t just extended to Jews. She needed all the help she could get.

“I’m keen and I’m very hard working,” she found the words at last. “And I’m a quick learner. I don’t need telling twice.”

“So your reference says.” Matron looked down at the letter in front of her. “This Miss Gold clearly thinks a lot of you.”

Dora blushed at the compliment. Esther had taken a real chance, writing that reference behind her father’s back; old Jacob would go mad if he found out his daughter was helping one of his employees to find another job. “Miss Esther reckons I’m one of her best girls on the machines. I’ve got the hands, she says.”

She saw Matron looking at her hands and quickly knotted them in her lap so the woman wouldn’t see her bitten down nails, or the calluses the size of mothballs that covered her fingers. ‘Grafter’s hands’, her mother called them. But they didn’t look like the right kind of hands to soothe a fevered brow.

“I have no doubt you’re a hard worker, Miss Doyle,” Matron said. “But then so is every girl who comes in here. And most of them are far better qualified than you.”

Dora’s chin lifted. “I’ve got my certificates. I went back to night school to get them.”

“So I see.” Matron’s voice was soft, with an underlying note of steel. “But, as you know, the Nightingale is one of the best teaching hospitals in London. We have girls from all over the country wanting to train here.” She met Dora’s eyes steadily across the desk. “So why should we accept you and not them? What makes you so special, Miss Doyle?”

Dora dropped her gaze to stare at the herringbone pattern of the polished parquet. She wanted to tell this woman how she took care of her younger brothers and sisters, and had even helped bring the youngest, Little Alfie, into the world two years ago. She wanted to explain how she’d nursed Nanna Winnie through a bad bout of bronchitis last winter when everyone thought she’d had it for sure.

Most of all, she wanted to talk about Maggie, her beautiful sister who’d died when Dora was twelve years old. She’d sat beside her bed for three days, watching her slip away. It was Maggie’s death more than anything that had made her want to become a nurse and to stop other families suffering the way hers had.

But her mother didn’t like them talking about their personal business to anyone. And it probably wasn’t the clever answer Matron was looking for anyway.

She wasn’t even special in her family. Peter was the eldest, Little Alfie the youngest. Josie was the prettiest and Bea was the naughtiest. And then there was Dora, stuck in the middle.

“I see.” Matron paused. She seemed almost disappointed, Dora thought. “Well, in that case I don’t think there’s much more to say.” She began gathering up her notes. “We will write to you and let you know our decision in due course. Thank you, Miss Doyle…”

Dora felt a surge of panic. She’d let herself down. She could feel the moment ebbing away, and with it all her hopes.  She would never wear the red-lined cloak and walk with pride like those other girls. It would be back to the machines at Gold’s Garments for her until her eyes went or her fingers became so bent with rheumatism she couldn’t work any more.

Esther Gold’s words came back to her. What have you got to lose?

“Give me a chance,” she blurted out.

Matron looked askance at her. “I beg your pardon?”

Dora could feel her face flaming to the roots of her hair, but she had to speak up. “I know I don’t have as much proper schooling as the other girls, but I’ll work really hard, I promise.” The words were falling over themselves as she tried to get them out before she lost her nerve.

“You won’t regret it, I swear.  I’ll be the best nurse this place has ever seen. Just give me the chance.

Matron’s brows lifted towards the starched edge of her headdress. “And if I don’t?”

“I’ll apply again, here or somewhere else. And I’ll keep on applying until someone says yes,” Dora declared defiantly. “I’ll be a nurse one day. And I’ll be a good one, too.”

Matron stared at her so hard Dora felt her heart sink to her borrowed shoes.
“Thank you, Miss Doyle,” she said. “I think I’ve heard enough.”

If you’d told me this time two years ago that I’d be writing a series of novels based on an East End hospital in the 1930s, I wouldn’t have believed you.

At that time I’d written eight contemporary romantic novels under the name Donna Hay. One of them, Waiting in the Wings, even won the RNA New Writers Award back in 1999.

I loved writing romance (I still do), but I wanted more. Often in my previous novels, I’d found myself more interested in the other relationships in my story. Sibling rivalry, the betrayal of best friends, the complexities of the mother-daughter relationship, fascinated me much more than boy meets girl.

I also longed to write something set in another time period. Writing about the past opens up so many possibilities. Imagine a time when life was full of taboos; when divorce could turn you into a social outcast, and getting pregnant out of wedlock was just about the worst thing a young girl could do. It might not have been much fun to live in, but it’s great material for a writer!

But I really didn’t think I’d get the chance, until the day my agent called and said that a publisher she knew was looking for someone to write a series of books set in a hospital during the early 20th century.
“Although it’s probably not your kind of thing…” she added.

Was she kidding? I loved the idea! And the more I researched the lives of nurses during that period, the more I knew I wanted to write about them.

A nurses’ life was harsh, to say the least. They trained for three years, during which time they ‘lived in’ under the watchful eye of the Home Sister. They were not allowed visitors beyond the front door of the nurses’ home, and they had to be in bed for lights out (although they devised ingenious ways to get around this particular rule). In some hospitals, a student faced instant dismissal for even speaking to a man (they seemed to get round this one, too, as my own Nightingale Girls demonstrate!).  They worked 14 hour shifts, and apart from three short breaks they were expected to be on their feet the whole time. And woe betide a young nurse who broke a thermometer, spoke back to a ward sister or even walked through a door before a senior member of staff – she could expect a severe dressing down from Matron!

To write about young women living, loving and having fun under this kind of strict regime was too good an opportunity to miss. I’d already come up with my three main characters before I’d finished my research. Not to mention the cast of sisters, staff nurses, porters and cleaners who also made up the Nightingale Hospital.
Thanks to them, I have dozens of stories to tell, and I’m really exciting about writing more Nightingale books (the second, The Nightingale Sisters, is due out next spring). Who knows, one day I might be tempted to write another contemporary romance. But for now, I’m very happy to be living in the past!

I have four of your books, Donna. I started with Waiting in the Wings and then bought three others! I really enjoyed them. I have to admit, I don't have any interest in historical stories about nurses BUT - the fact that you've written them will encourage me to give this a try.

I admire you for taking on this difficult subject. I've read about those hospitals. They weren't easy. I'll be interested in how your society girl turns out. I have a novel tucked away on this period. Maybe I should drag it out andlook at it again.