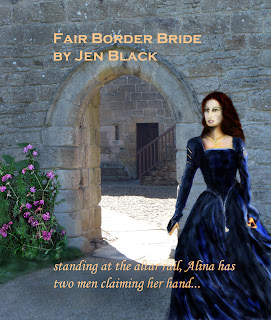 This is the cover for my  historical romance Fair Border Bride. It's been up on Kindle since mid-October, and though it is selling in the US, not much is moving via amazon UK. Now this could mean that everyone in the UK buys directly from Amazon.com - or it could mean that I've failed miserably to tell anyone in the UK that it exists! and I think this may well be true!                                                              When the story opens in the summer of 1543, Harry is setting off on his first mission for his father, the Deputy Warden of the English West March, and adopts the alias Harry Scott.  travelling through Northumberland, he meets Alina and follows her home to Aydon only to fall foul of a marauding band of border reivers intent on stealing cattle from Aydon. Things go from bad to worse when Alina's father threatens to kill Harry. Alina is horrified, and Harry escapes only because Matho Spirston, captain of the Aydon guards, decides to help him. Alina fears she will never see Harry again, and attempts to prepare herself to marry a well to do neighbour as her father wishes. But she can't forget him...

There's a book trailer  here
and a link to some 5-star reviews here
and here's a short excerpt:

Alina’s father  flings Harry into the dungeon at Aydon Castle and threatens him with the Leap next day. Alina creeps out of her bed to visit Harry at midnight when the castle is quiet.
“Tell me,” he said, before he forgot all practical things in the delight of her presence. “Your father threatens me with something called the Leap. What is it?”
“She dipped her head, and he heard her sharp intake of breath. “It’s the ravine, Harry.” She pointed towards the dark bulk of the hall. “On the other side is a ravine. It is deep, with the Ay burn at the bottom. Father…he makes prisoners jump from the precipice outside the hall.”
“Ah.” He raised her knuckles to his mouth, and kissed them to dispel the shadowy presence of Death looming in the darkness behind him. He remembered looking into the ravine the night he rode up here. His tongue probed the cleft between her fingers. She gasped. Harry’s blood sang through his body, and he kissed her knuckles again. “How deep, do you think?”
“Twenty times the height of a man, they say.” She shivered and frowned as she watched him nuzzle her fingers. “There are rocks and trees…”
“And no one survives?”
Her face crumpled. “Oh, Harry, sometimes they do, but they are broken, twisted creatures—”
A deep voice sounded from above, and Alina flung up her head. “Matho, please!”
Matho must have agreed, for she turned back to Harry. Her hand had warmed in his and when he kissed it once more, her other hand snaked through the bars and stroked his face, crept to the back of his neck.
“Ah, Alina,” he murmured. “Would that we had no iron bars between us.”

His flesh hardened. If this was his last night on earth, he wanted some pleasure to beguile his thoughts. He reached both hands through the grill and drew her close against the iron bars and in truth she was not reluctant, even when his hand roamed beneath her cloak, caught a ribbon and her nightgown gaped from neck to waist. His palm found the firm weight and curve of her breast and nestled around it.”
Posted by Jen Black at 15:26

Loved the trailer! I've quite a few books on my list but I've added yours to it.

Congratulations on your book!

Thanks!I suppose I ought to promote a little more than I do!