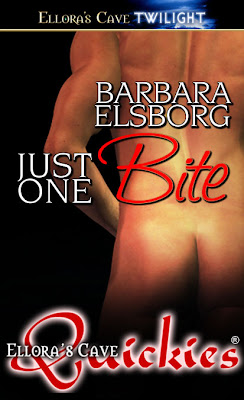 I wrote a 'Quickie' for Ellora's Cave - a paranormal story set in the UK - and it came out a week ago.
It's supposed to be funny - so I hope it brings a smile to the face of those who read it. It's less than £2 to buy.

Liv is having the day from hell. Hit on by her piggish landlord, a victim of an attempted mugging by a guy who bites, and then her hair gets caught in the coffee machine. Things go from bad to worse when she’s stalked on her way home, and the stalker turns out to be the morning’s mugger. Except he’s tall, dark and delicious, offering an apology, flowers and a body to die for. Oh, and he wants to cook a steak dinner just for Liv.

There’s just one snag. He’s a raving lunatic who thinks he’s a werewolf.

Congratulations, Barbara, on your latest release! Sounds a winner!
I made your links live, BTW