New Release - Collective Shivers: Can You Spare a Dollar for Japan? 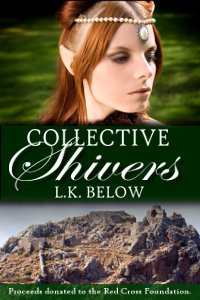 The entire world has been affected in some way by the terrifying events caused by the Sendai earthquake this past March. News stories continue to add more about these devastating events and the tenuous circumstances in Japan.

Upon being bombarded by these news stories, romance and speculative fiction writer L.K. Below could not bear to stand idle. Rather than indulge her feeling of helplessness, she did the only thing she knew how to do: she wrote. Two weeks after the Sendai disaster, the product is a short fantasy story called Collective Shivers.

Hailed by beta readers as an “out-of-world experience,” Collective Shivers contains an earthquake, a mysterious and resilient people, and one man who suddenly doesn’t feel up to scratch. Who knew that a people so outwardly unfeeling could have touched Gunnarr in such an emotional way?

More information about this story can be found at the author’s website, www.lbelow.net/japan. All proceeds from this book will be donated to the Red Cross foundation to help with relief efforts in Sendai and elsewhere as new tragedies unfold.

So the real question is: Can you spare a dollar for Japan?
Posted by L. K. Below/Lindsay Below at 16:55