A Regency Xmas with spice!

Unexpected Xmas will be out  the end of October and is set in the Regency period. It's a sexy erotica novella and I hope it will give you an insight into a Regency Xmas, with a hero who realizes the love he thought he could conquer is real. When he does come to his senses, he finds obstacles he had never foreseen and one obstacle to overcome that seems insurmountable.

Here is a short excerpt, :

"And the snow ball fight was on.
Ten minutes later Caro acknowledged defeat.
“If I could I’d hold out longer but I’m exhausted. I don’t think I could pack another snowball. It’s only that you have more strength, my lord, not that you have superior strategy.”
She stood, panting and smiling, and his heart betrayed him once again. His heart and his swollen cock. How he could grow so large with so little encouragement and snow down his shirt and neck he didn’t know.
Why did this one girl have such power over him? Surely it was only because there was no other distractions when they were so isolated. 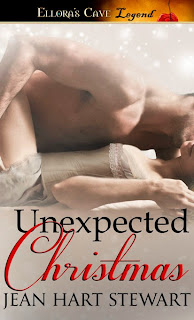 He smiled a devilish grin.
“Did we set a forfeit for the loser? No, we did not. I therefore claim my winner’s prize.”
There in the snow he took her in his arms and kissed her with the passion that had been building for the last two days. Ever since she’d raised those glorious eyes. Greatcoats, capes, snow coating both their faces and hair, nothing could dim his kiss and her passionate response.


When he could breathe again he did not release his hold on her.
“Caro, do you know where this is going? Do you even begin to know how much I want you? I can’t promise to hold back tonight.”
She was silent even as she snuggled as close to him as she could get.
“Yes, I think I do. It’s not nearly as much as I want you, Sebastian. But if I surrender we both know what that means. I’m not worthy of your notice in the ton where you shine. And I’m not really cut out to be a mistress. I need to think.”
He buried his face in her hair.

“Ah, Caro. I want you more than I’ve ever wanted another woman.”
She moved away from him.

“I’m not sure that’s enough, Sebastian. Maybe for you. But maybe not for me.”
I've kept the excerpt PG. The love between Sebastian and Caro is real, but a little known Regency custom threatens the life they want together.  With opposition from every side, Sebastian needs help to overcome it all and claim Caro.
Unexpected Xmas will soon be on Amazon as well as Ellora's Cave. Or check my website, www.jeanhartstewart.com

I love regency stories and I love Christmas stories!!! Congrats.

Thanks, Barbara, I love both of those too. Jean