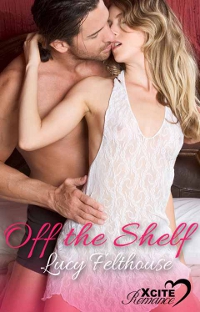 
At 35, travel writer Annalise is fed up with insensitive comments about being left on the shelf. It’s not as if she doesn’t want a man, but her busy career doesn’t leave her much time for relationships. Sexy liaisons with passing acquaintances give Annalise physical satisfaction, but she needs more than that. She wants a man who will satisfy her mind as well as her body. But where will she find someone like that? It seems Annalise may be in luck when a new member of staff starts working in the bookshop at the airport she regularly travels through. Damien appears to tick all the boxes; he’s gorgeous, funny and intelligent, and he shares Annalise’s love of books and travel. The trouble is, Damien’s shy and Annalise is terrified of rejection. Can they overcome their fears and admit their feelings, or are they doomed to remain on the shelf?


And here's a seriously saucy excerpt - this is the beginning of the novella, I don't start things off lightly!


Pushing the ‘on’ button, Annalise moved the vibrator down between her parted legs and eased it inside her eager pussy. As the ears of the Rampant Rabbit slid into position on her clit, she groaned with pleasure and rolled her hips, desperate to get more delicious friction. Then she pressed another button on the toy’s control panel to ramp up the power another notch. As much as she’d prefer a slower build-up to her orgasm, she just didn’t have the time. She had to leave for the airport in a couple of hours, and she hadn’t even packed her case. A quick knee-trembler would have to suffice.
As the vibrator buzzed away between her thighs, Annalise closed her eyes and tried to empty her mind of anything but the pleasure she was experiencing. After a brief flirtation with the thought that she’d much prefer a hot man between her legs bringing her to orgasm, Annalise simply enjoyed the feeling of her impending climax. The busily-vibrating bunny ears pressed tightly against her sensitive flesh soon had her pussy fluttering. Then, without warning, Annalise was quickly yanked onto her pleasure plateau and immediately pushed off, leaving her writhing and shouting on the bed as a powerful orgasm overtook her body.
Annalise arched her back as waves of pleasure crashed over her, and her cunt clenched and grabbed at the toy buried deep inside. Her swollen clit throbbed, quickly becoming too sensitive for the unrelenting stimulation from the vibrator. Switching it off and pulling out, Annalise dropped the toy onto the mattress by her side and gave a satisfied moan as she rode out the remainder of her climax. Finally, when the twitches and spasms had abated and her heart rate and breathing were almost back to normal, Annalise grabbed the Rabbit and rolled across to the side of her bed where the toy box was kept. She made short but thorough work of cleaning it, then reluctantly put it in its case, popped it into the small bedside cupboard and shut the door.
Annalise hated leaving her favourite toy behind when she went away, but she just wasn’t brave enough to take it with her. She usually only took carry-on luggage, and the very thought of the distinctive shape of the Rampant Rabbit popping up on the screen of the airport scanners made her shudder. It would be bad enough for the staff to see it on their monitors, knowing what it was and giving her knowing looks; imagine what would happen if they decided to check inside her bags! She would want to curl up and die of embarrassment, she just knew it.
No, it was much better off staying here. She could make do with her right hand for a few days. Even better, she might even meet someone. Annalise smiled. She’d had some pretty steamy encounters on her travels. The desk clerk in Dubai, the gym manager in Turkey, the waiter in Corfu…
Annalise shook herself. This wasn’t the time to let her mind wander down that path and get herself all worked up. She had to go and get ready now. There’d be plenty of time for daydreaming later, when she was in long and boring queues, and on the flight.
More info and buy links are here: http://lucyfelthouse.co.uk/published-works/off-the-shelf/
*****
Lucy is a graduate of the University of Derby, where she studied Creative Writing. During her first year, she was dared to write an erotic story - so she did. It went down a storm and she's never looked back. Lucy has had stories published by Cleis Press, Constable and Robinson, House of Erotica, Noble Romance, Ravenous Romance, Resplendence Publishing, Summerhouse Publishing, Sweetmeats Press and Xcite Books. She is also the editor of Uniform Behaviour and Seducing the Myth. Find out more at http://www.lucyfelthouse.co.uk. Join her on Facebook and Twitter, and subscribe to her newsletter at: http://eepurl.com/gMQb9
Posted by Lucy Felthouse at 08:00

Really hot..good for you. It's hard to write erotica that well.

Thanks Jean, I appreciate it! :)