1. Your descriptions of Egypt (in TRUMPET) are so colorful. Did you actually see what you describe? 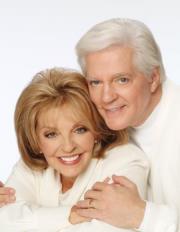 Did we ever! Yes, we trudged the dusty, spittle-bedecked, splendid streets of Cairo. Crept into the pyramids and stumbled over the stones of Abu Simbel (now relocated to higher ground). We sailed into Alexandria and Bill was actually arrested by the Egyptian government, while I, his loving, supportive spouse, flew home to do our television show Days of Our Lives on NBC. But that’s another story, all quite true, you can find in our first book “Like Sands Through the Hourglass” our double memoir.

2. When writing about Sarah Siddons’s retirement, were there actual people you’ve worked with who came to mind?

Certainly, there is no lack of great British actresses we can envision, and Mrs. Sarah Kemble Siddons was the most celebrated drama queen of her day. As a little girl I worked for years with Billie Burke, a famous beauty and widow of Florenz Ziegfeld, also Sarah Churchill. Bill worked with Shirley Booth and Claire Trevor, Shirlery MacLaine and Frances Reid, among hundreds of other fabulous ladies. Of course since we both have made a living as performers all our long lives, we’ve encountered quite a few memorable types, not all of whom achieved greatness or even had it thrust upon them; but most actors believe greatness is always just around the corner. That keeps them young and hopeful!

3. Were Lizzie’s acting lessons based on your study of your own craft?

Goodness yes, especially the conflicting advice. The reality she strives for was just beginning to take hold on the stage in the early nineteenth century. We researched in the London Theater Library and handled playbills, reviews and programs from the Regency Period. Fame and folly haven’t changed much. The shows, scenes, and spectacles we describe are more based on fact than fancy. Bill has sung many of the songs and we included our favorites. Yea, Mozart!

4. Was Lizzie’s home on Duncan Terrace based on a real place? Chickens? Stump? Etc.

Bill’s grandmother killed many a chicken for Sunday dinner exactly in the manner described. Duncan Terrace is one of the many London locations we personally visited looking for Lizzie’s roots and Octavia’s sin-soaked digs. What fun we had, especially touring beneath the stage of Drury Lane. Georgie’s duty was a great excuse to go off to Belgium and visit the battlefield of Waterloo. Every item described from the salt pig to the Egyptian erotica was seen and photographed in a museum or historic house by your intrepid writers. Some of it required very serious study!

5. Having been performers all these years, what experiences inspired your story?

Opening night terrors and bliss for example? Bill starred on Broadway for Rodgers and Hammerstein in “Me And Juliet" was the most famous voice in America when his Ballad of Davy Crockett won a gold record. Susan began her career in grand opera at the tender age of four. Together and apart we have played rodeos, radio, nightclubs, live television, telethons, interview shows (Oprah, Carson, Merv) motion pictures ( Bill worked with Otto Preminger, that great tyrant of a film director), documentaries, game shows (had a ball doing Hollywood Squares) and even bar mitzvahs. Soooo, we’ve seen a lot.

6. What about those show biz characters?

The dancers, singers, impresarios, carpenters clowns and scribes are all real, and we love them. Carlo Tomassi is based on a treasured friend. His dialogue wrote itself. The family is our family, and the people from history are themselves as we believed them to be.

7. Why did you include the secondary plot of Georgie being a soldier in the Napoleonic Wars?

The struggle against Bonaparte consumed the blood, treasure and very souls of the English people. How could we neglect a conflict so parallel to modern wars? Families sacrificed their sons in battles, fought on foreign soil to protect the homeland for years. It swept up all classes of people in a grinding maelstrom that was the first modern war.

8. In what ways does Lizzie’s dream of performing relate to your own lives?

Everything about Elizabeth Trumpet is part of our own DNA. From her first enchanted hours in the audience to her faltering debut onstage, she is Hayes and Hayes. Change the costumes and the scripts to the twenty-first century and we imagined ourselves in her place. Really, we didn’t have to image her struggles. We knew.

9. Is the character Jack Faversham someone you have known?

Like Jack Faversham, many celebrities ride on the moonbeams of their own imagined greatness. Alas. We’ve known wildly talented people who were their own worst enemies, cutting “others in the cast” until they cut too deep once too often. But remember, Jack is a hell of an actor.

10. Is Lizzie’s fascination with Jack possible?

Have you known reasonable people who lose themselves in such a relationship? We both have. Susan admits to losing her footing a few times in the wake of a romantic hero. Usually on a horse.

11. Was it difficult creating dialogue for your authentic historical characters?

We quoted them when quotes were to be found, and improvised out loud until we hit the right note. Let’s say it was “challenging” (that modern word that really means bloody hard work).

So, you may ask—though you didn’t—did you emerge after seven years of work on Trumpet, still happily married? We are thirty seven years in and still going strong. After all that creative dust from the grind of writing settled on the heaps of pages, we straightened up from the keyboard with broad smiles of satisfaction and no bruises. Susan: My acting partner, my writing partner, my life partner, is a gem. Bill: We think our love for life shines through Lizzie. Both: May it beam up from the pages to you. 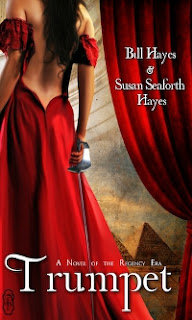 Brilliant and sassy Elizabeth Trumpet fantasizes starring on the London stage, but to become an actress in 1803 is tantamount to losing her virginity in the most debasing way.

After watching her mother die and her father lose his mind, the courageous sixteen-year-old must find a way to save her family. She scores her first acting job as a fencer—the deadly skill she learned from her brother training for the military. Blessed with talent and a rare singing voice, Lizzie pursues her career, learning from theatrical characters high and low.

When reckless actor Jonathan Faversham sets eyes on Miss Trumpet, he knows he’s found the partner of his life. But Faversham carries ruinous baggage from a dark past. Entangled in lust and ambition, Lizzie gives him her heart and they reach the heights together. Until Lizzie gets more applause than he…

From the magnificence of Regency palaces and the Theatre Royal Covent Garden to the sun-baked pyramids of Egypt and the arms of a real-life Samson, Lizzie is never far from trouble. As her brother rides to glory with Wellington in the Napoleonic Wars, great events threaten her survival. Danger lurks behind stage curtains, when a madman sets fire to take her life and she lifts a sword in revenge.

Will this once innocent girl, with her rise to stardom, be remembered for her art? Or for her shame?

Trumpet is published by Decadent Publishing, and is available from Amazon UK, Amazon US, All Romance eBooks, Smashwords and all other good eBook retailers.

COMMENT TO WIN!
Bill and Susan are generously giving away two prizes on this tour! One is their double memoir, Like Sands Through the Hourglass, and the second is Bill's CD, This is Bill Hayes. Just leave a comment (please include your email address in the body of the comment) on this post to be entered. This giveaway is tour wide, and the more comments you leave, the more chance you have of winning, so check out the rest of the tour schedule here: http://www.writermarketing.co.uk/prpromotion/blog-tours/currently-on-tour/bill-susan-hayes/
Posted by Lucy Felthouse at 04:00

I enjoyed the interview. Nice questions and answers.