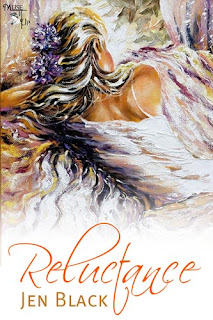 Nicely sparky and spiky, Jen!
Can't wait for this one!

I remember this story in a previous version, but you have added a new dimension to this one making me want to read it again. Congratulations with the release.

Intriguing start, Jen. Look forward to reading the rest of the book when it's out!

Oh ! I liked the blurb and the Excerpt even more ... is there already a release date ?

I like it! Lovely artwork on your cover too.

Definitely have to add this to my reading list! Love the excerpt.

Thanks for the comments, peeps! Reluctance is due out in April, but so far no more specific date.
so pleased you all enjoyed the excerpt!
Jen