To Gain What's Lost out now.

To Gain What's Lost is set in Victorian Yorkshire and is my latest release! 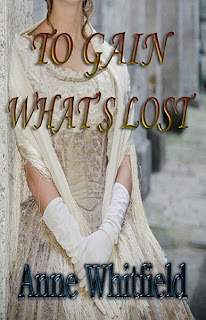 Blurb:
She thinks her life has changed for the better, her dark secrets hidden, but little does she know…
The daughter of a wealthy landowner in Yorkshire, England in 1864, Anna Thornton leads a privileged life. But she is not content. She wants her life to mean something and longs to be accepted for the free-thinking, independent woman she is. When the dashing, adventurer Matt Cowan sweeps her off her feet, she thinks she has finally met her soul mate. However, he’s not the man he seems to be. After he sails for South America, leaving her behind in England, Anna discovers she’s pregnant. Heartbroken she flees her family home, determined to keep her child’s illegitimacy a secret.

He has a few dark secrets of his own…
Brenton O’Mara is a strong, independent man who wants to make his own way without relying on his father’s wealth. He comes to Anna’s new home looking for work and convinces the reluctant woman to hire him. But Anna's wary of men, of love, and treats him as nothing more than the penniless laborer she believes him to be. Then, just when Anna seems to feel she is getting on with her new life, and Brenton believes he has a chance with her, the past rears up to confront them. Can Brenton and Anna learn to trust each other, or will they let yesterday destroy tomorrow?

Available in Kindle and paperback from various sources like Amazon.com

Posted by AnneMarie Brear at 02:59

Congratulations on your latest release, Anne! I'm sure it will sell and sell!
Glorious cover!

What a lovely cover, Anne. Congratulations!