Review: Theodora Goss, 'The Thorn and the Blossom' 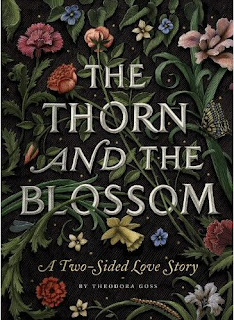 
Reading The Thorn and the Blossom is an intriguingly different experience from the usual. The reader chooses whether to begin with Brendan's story, or to turn the book and begin with Evelyn.

I began with Brendan's story. My first delighted surprise was how the book itself behaved - it opened like an accordion. On one side you can read from one character's viewpoint, then you can turn the book over and read from the other protagonist's point of view. The whole book is beautifully produced, with heavy paper and lush illustrations, making reading it a very satisfying and tactile experience.

Each summer, Brendan works in his father's bookshop in the Cornish town of Clewes , a place he has lived all his life but one which no longer feels like home to him now that he is studying literature at Oxford . One day he encounters a striking, auburn-haired young woman in the shop and they introduce themselves - Brendan and Evelyn.

Brendan asks Evelyn to walk with him to a local circle of ancient standing stones called Gawan's Court - a place where, according to legend, the Arthurian knight Gawan and Cornish Queen Elowen had fought giants and fallen in love before being parted by a giantess's curse. While at the circle. Brendan sees Evelyn briefly as the tragic Queen Elowen. He dismisses the brief vision as unimportant, but is attracted to Evelyn and arranges to meet her again. This time they spend the week together and Brendan becomes convinced he is falling in love with the young American.

But there are obstacles. Evelyn will be leaving soon, returning to Boston , and there is a strange mystery about her. When Brendan kisses her, she reacts as if in horror and flees. She gives no explanation and Brendan is desolate.

Brendan puts his life back together. He completes his degree in medieval literature, finishes a translation of a long Cornish poem of 'The Tale of a Green Knight' - a Cornish version of Gawan and Elowen - and meets and marries another woman, Isabel.

Tragedy strikes again. Isabel is terribly injured in a riding accident and left in a deep coma. While she is still in this state in hospital, Evelyn reappears in Brendan's life when she applies for a college post where he also teaches.

They meet and resume a relationship, and this time it is consummated. Brendan makes a mistake, however, in not telling Evelyn about Isabel or her tragic condition. When Evelyn learns about Isabel and sees her in a coma, she flees again.

Will he win her back?

To learn if he does, I turned to the other half of the story, Evelyn's version.

Evelyn is fey. She sees the spirit world, including green men and fairies, and is deeply affected by it. Knowing this makes her behaviour more sympathetic and understandable, as it is suggested that she and Brendan are 'playing out' the love of Gawan and Elowen, only in a modern setting.

Both sides of the story end optimistically, with the hope that Brendan and Evelyn will defeat the curse that blighted Gawan and Elowen.

'The Thorn and the Blossom' is written in the style of a fable, with a lot of telling rather than showing. Despite this and despite feeling that the relationship between Brendan and his wife Isabel was rather under-developed, I found the story to be involving and rewarding - at times I almost felt to be inside the pages of a beautiful medieval manuscript.

It is a haunting, original read, if rather short, and I can certainly recommend it.

(Review of a copy sent unsolicited from the publisher.)
Posted by Lindsay Townsend at 08:00

Email ThisBlogThis!Share to TwitterShare to FacebookShare to Pinterest
Labels: romance, The Thorn and the Blossom, Theodora Goss