My Dream of Madonna/An Ecstatic Rendezvous 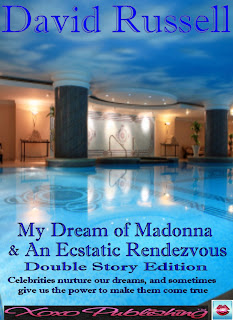 My Dream of Madonna/An Ecstatic Rendezvous is actually two short stories written by author, David Russell.
The first story, My Dream of Madonna is about a dream the character had about his desire to be a sex object for Madonna - the pop singer. The story overall is a little weird but does have some sensual elements. The author's use of description in this story clearly shows that the story is a complete fantasy as it sometimes did not make sense and appeared very unrealistic. I understood the use of references to songs by Madonna and even flamboyant scenes that appeared to act out scenes from her videos, but it sometimes made this story a little off-balanced.

The second story, An Ecstatic Rendezvous was actually more enjoyable and had more sensual elements. It was about a very handsome but shy man who yearned to have a one night stand with a sexy woman. One day he decided to step out of his comfort zone and gained enough courage to ask a girl out. Their sexual encounter was interesting. I liked the imagination that flowed with this story. It showed how he overcame his shyness to live out his fantasy for at least one time.

Overall, both stories were "non-traditional" in terms of each story line, and sometimes appeared a little exaggerated as it seemed that both stories explore a man's fantasy about being intimate with a special female lover. What I liked about both stories is that is shows how fantasies and dreams can sometimes be ambiguous and unclear but can make sense at the same time.

This ebook would be an interesting read for someone who is looking for something different.


Extract
My Dream of Madonna
I was tossing and turning, half-dreaming my way into wakefulness. The telephone rang. Before it had finished its third ring, I picked up the receiver.
"Hello honey, you got through."
I sensed the voice with an ethereal shudder. It was hers and no other's. It must have been that chain letter, or that very special message on the Contact Line. "We've got to meet. Midnight at the Imperial Palace. Look your best; be your
best."
So it was all going to happen, Madonna would approve me, fulfill me. I was all atremble. I hurriedly shaved, showered and dressed. I looked intellectually smart-casual in dark brown cords? What the hell? Whatever fashion I chose, Madonna was sure to do some really imaginative permutations.
I went down to the vestibule, meaning to call a cab. There, waiting for me, were her bodyguards
—about five foot eight. They were wearing white silk robes with pink sashes. They beckoned me to kneel at the altar, and then to stand. The lights dimmed. Then, from the rear, Madonna entered. She looked exquisite in a purple velvet ball gown, glittering with a handful of jewels flashing all the colors of the rainbow, revealing her shoulders, so wonderfully toned by all that sensual exercise. Her hair was now black and straight, her complexion fresh, without make-up. She stood between the two rows of girls, and then she smiled at me. "You're looking great," shesaid, "I must see more."
"Hi! We've come to collect you. This is your honor and ours."They ushered me into a plush Chevrolet. The engine purred. The upholstery was resilient and pliant, in time, in tune with my quivering anticipation. I was going to be a
sex-object for Madonna.
The cathedral's columns tapered into the infinite darkness, like seductive limbs in erotic dress. The bodyguards motioned me to go in, then turned and left. The interior was swathed in a dim red light. I could hear the dulcet, ethereal sounds of
a choir. But no singers were to be seen. I looked ahead. I was obviously in the chamber of state, where the emperor made his proclamations. There, in two lines, were twelve beautiful girls, all the same height
﻿
She lifted her arms in the air and nodded at the girls. The one on the far left undid her sash, parted her robe, and pushed it back over her shoulders. It fell to the floor to reveal the girl's athletic body, tightly encased in a white girdle and a black bra-top. She came and undid my jacket, then bore it away.
Each girl did the same with one more item of my clothing. Madonna's eyes gradually lit up as my body was revealed to her. At last I stood before her, just wearing black briefs. Madonna was feasting at the sight of my torso and legs. Our faces edged together. Our lips touched and our tongues drew together as we held our breath through
a five-minute kiss.
"Wonderful," she whispered. "Could you help me with my preparations now?"
Now I was to undress Madonna! I went up to the altar, put my hands on her slender waist, and looked her straight in the eye. The gown had a zipper at the back. I undid it and eased it down. As it fell to the floor, it captured a moment of eternity. The song resounded in my ears, "I close my eyes. Oh God, I think I'm falling, out of the skies, I close my eyes."
—tall, coffee-colored, muscular hunks, perfect role-models for my workouts.
Posted by David Russell at 15:37