I’m always on the look out for ideas, finding inspiration from many sources: family memories, history of the places I’ve lived in including the beautiful English Lake District and Cornwall. I’ve dipped into interesting parts of my own life, such as when we had a smallholding and tried the ‘good life’. Having fully exploited those ideas, I then moved on to interviewing people for other fascinating stories.

I begin by talking to people who either can recall such times themselves, or retell that of their own parents or siblings. I’ve met some fascinating people over the years, and what a joy it is to listen to their stories, so real and personal, vividly recalled and rarely recorded anywhere. Memories are fallible, of course, and facts need to be checked against whatever documentary evidence I can find such as newspaper reports, letters, diaries, biographies, as well as history books. The walls of my office are packed with books covering all the topics I love.

Writing also demands a need to investigate natural history, geography, geology and topography. My farm or village might be fictional but the mountains, forests and lakes have to be entirely accurate; the walks my heroine takes are actually trodden by me. The flowers must be in season, the birds on their migratory flights south from Scandinavia, carefully checked. The agricultural law of the period must be studied as well as weather reports. I cannot say 1945 was a beautiful summer if it rained all through July and the harvest was ruined. Nothing can be fudged, because unlike Medieval times, someone will remember.

The gritty northern street saga has its own requirements, format and boundaries and usually concerns a strong woman fighting against the poverty of her surroundings, as well as the trials and tribulations of the times in which she lives. My family have been weavers (or websters as they were once called) for generations on both sides of the Pennines. My mother wove parachutes during the war, and lived with her widowed mother while her husband was away fighting. I have vivid memories of my grandmother black-leading her range and donkey-stoning her doorstep. You could have eaten your dinner off her stone flag floors for although she was poor, she was clean. Therein lay her dignity.

When the war ended, new problems arose. Some men were less than impressed with their welcome home in a society gone to pieces. Relationships had changed, jobs and homes hard to come by, shortages and austerity still prevalent. Mothers often still treated their sons as boys, instead of grown men. Husbands were unprepared for a more tough and independent wife, or could be suffering injuries, nightmares or depression. The effects of war are extremely traumatic and it’s fascinating to learn how such problems were dealt with, and to write about them as I’ve done in this latest book: Home is Where the Heart Is. 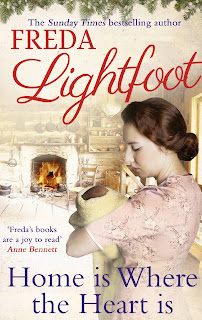 1945: Christmas is approaching and Cathie Morgan is awaiting the return of her beloved fiancé, Alexander Ramsay. But she has a secret that she’s anxious to share with him. One that could change everything between them. Her sister has died and she wants to adopt her son. When the truth is finally revealed, Alex immediately calls off the wedding, claiming that the baby is actually Cathie’s, causing all of Cathie’s fears to be realised. As Cathie battles to reassure Alex of her fidelity, she must also juggle the care of the baby and their home. But then Alex crosses the line with a deceit that is unforgivable, leaving Cathie to muster the courage to forge a life for her and her nephew alone. Will Cathie ever be able to trust another man again and as peace begins to settle will she ever be able to call a house a home…

Available in most good book shops and on line:

Posted by Freda Lightfoot at 16:12