FLY OR FALL - is not a romance

But it is a love story for grown ups.... 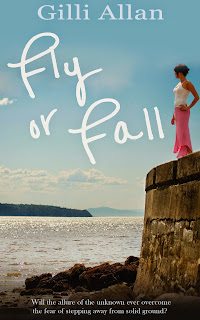 Wife and mother, Nell, fears change, but it is forced upon her by her manipulative husband, Trevor. Finding herself in a new world of flirtation and casual infidelity, her principles are undermined and she’s tempted. Should she emulate the behaviour of her new friends or stick with the safe and familiar?

But everything Nell has accepted at face value has a dark side.  Everyone - even her nearest and dearest - has been lying. She’s even deceived herself. The presentiment of disaster, first felt as a tremor at the start of the story, rumbles into a full blown earthquake. When the dust settles, nothing is as it previously seemed.

And when an unlikely love blossoms from the wreckage of her life, she believes it is doomed.

The future, for the woman who feared change, is irrevocably altered. But has she been broken, or has she transformed herself? “

An extract from FLY OR FALL - Chapter Two

The family have not been living in their new house for many months and renovations have recently started. Nell is aware someone new has joined the team of workmen today, but meets him for the first time when he knocks on her door to use the loo. Her first sight of him makes an impression, but she ignores and discounts her response. Instead of returning outside once he’s finished in the bathroom, he follows her into the kitchen. Feeling mildly irritated, Nell feels obliged to offer him a cup of coffee......


‘To start your life again you need bravery. I’m a bit of a wimp. In the past I had a vision of what lay ahead of me. Since we’ve come here it’s as if someone has wiped the board clean.’ Why on earth had I said that to this Sun reading stranger?  ..........


I started to write in childhood, a hobby only abandoned when real life supplanted the fiction. I didn’t go to Oxford or Cambridge but, after just enough exam passes to squeak in, I attended Croydon Art College. I didn’t work on any of the broadsheets, in publishing or television. Instead I was a shop assistant, a beauty consultant and a barmaid before landing my dream job as an illustrator in advertising. It was only when I was at home with my son that I began writing seriously. My first two novels were quickly published, but when the publisher ceased to trade, I went independent.
Over the years, I've been a school governor, a contributor to local newspapers, and a driving force behind the community shop in my Gloucestershire village.  Still a keen artist, I design Christmas cards and have begun book illustration.
I'm particularly delighted to have recently gained a new mainstream publisher. TORN was the first book to be published in a three book deal with Accent Press, FLY OR FALL is the second.

An intriguing story! Makes me want to read more.

Thanks for taking the trouble to read and comment, Angela. I appreciate it. gx