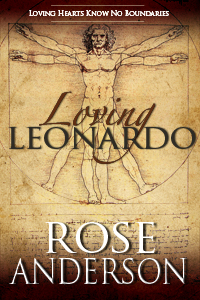 Bound by limits dictated by society, Art Historian Nicolas Halstead lived a guarded life until a tempest in the form of Elenora Schwaab blew into his world. At first Nicolas can’t decide if the audacious American is simply mad or plotting blackmail for not only does she declare knowledge of his homosexuality, she offers him a marriage proposal.

Nicolas has an encounter aboard ship and Ellie wants details.

And while visions danced behind closed my lids, the effects of nerve-dousing brandy and travel fatigue coalesced. My new wife gently examined every male detail that made our bodies differ, and damn me if I didn’t miss most of it. Done in by drink and her gentle touch, I went off to sleep in the arms of Morpheus.
***
I woke sometime in the night to discover myself half on the settee and under the spare coverlet from the bed. For a moment I didn’t know where I was. At last the details of the evening came in from the sides of my mind. I lifted the coverlet. That my cock was glued to my thigh was a mystery. I couldn’t remember past Ellie’s novice exploration of my privates.
One thing was certain however; the copious brandy to settle my nerves had kicked me right between the eyes as surely as a mule. I felt plain awful. Trying hard not to wake her, I quietly went to the commode where, hugging the throne so to speak, my body expelled the evening’s spirits as quickly as I’d taken them in. I poured myself a glass of water to rinse my mouth then hied myself back to the settee where I curled into a miserable ball and promptly fell back to sleep.
***
The next morning when I opened my bleary eyes, I felt a little better thanks to my midnight purge. Experience told me my queasy headache would last for several hours. In the outer room, an ungodly loud rap on the door was answered by the pleasant voice of my new wife. I heard her say, “Thank you. No, I’ll take it from here.”
A moment later she brought a wait cart into the sitting room. I greeted her groggily. There were covered dishes and carafes, but I could easily determine the menu by the savory scent of bacon and kippers, and sultry aroma of butter and cinnamon. My sour stomach told my nose to ignore it all.
She smiled. “I thought you’d prefer breakfast in here this morning.”
Needing to atone for my poor behavior, I offered, “I very much regret last night, Ellie. Please accept my ap—”
She cut me off, “We drank a rather lot last night, you and I. I must say I… ”
I listened to her dismiss the fact I’d acted like a dreadful sot by including herself in my solo drunkenness. That she’d seek to protect me from embarrassment by sharing the blame touched me deeply. I gave her an appreciative yet apologetic smile. “You’re kind. But it falls on my head, and believe me my head feels my remorse acutely.”
Laughing lightly, she handed me a dry biscuit. She tsk-tsked, “You poor thing. Here nibble this… slowly.”
She poured me a cup of coffee, adding cream and sugar lumps, presumably to her taste. “Coffee helps the morning-after head far better than tea. And this helps even more, believe me.” To my surprise, she splashed a tot of brandy in the cup. After my early-morning episode with the commode, I admit the sight of the decanter made my stomach lurch. I found myself wondering how she knew the hair of the dog remedy for a drunkard’s hangover. I asked her.
Laughing, she confided she’d “learned the hard way,” explaining vaguely that progressive Americans much enjoy their leisure, though they occasionally must pay the piper like everyone else. She also asked I please not mention that to my new father-in-law.
I gave a head-splitting laugh and promptly quelled it in an act of self-preservation. That sentient smile played over her lips, and once more the notion of familiarity came to me and then it was gone. Instead, I was reminded of a comment Mrs. Fletcher once made after catching her nephew and I kissing in the buttery. “It is wise to conceal that which cannot be disclosed, and disclose that which cannot be concealed. Now go find yourselves a private place to test the waters or tongues will wag, and Master Nicolas, you don’t want that, dear.”
Handing over the steaming cup, Ellie met my eye, “Trust me.”
Damn me if I didn’t.

I love that book cover, Rose. The novel sounds great. It's now on my TBR list.