The Strangest Inspiration by Lucy Felthouse

As a writer, I find inspiration in all kinds of places, conversations and people. Just lately I've found the most unusual things providing inspiration, things I wouldn't normally expect.

For example, I've visited the exclusive West London department store Harrods on more than one occasion. Usually to go and look at the puppies they have in their Pet Kingdom. But, just for a laugh, I've wandered all the departments to giggle at the ludicrous prices and fantasise about what I'd buy if I had lots of money. 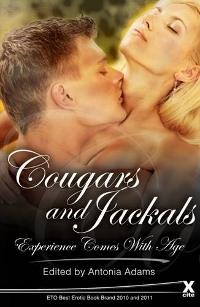 But I never thought I'd write about the place. That was, until Xcite Books put a call for submissions out looking for stories about cougars and jackals; that is, older women and younger men, and vice versa. Almost immediately, I decided I wanted to write about a jackal, and somehow from the depths of my imagination I pulled out a story about a young woman working in the furniture department of aforementioned department store. A new customer walks in, who happens to be a super hot older man, who has plenty of cash. But he's a nice guy, too. I'm not going to tell you any more because it'll ruin the story, but let's just say there's a very sexy ending, and I'd like to write about those characters some more in the future. :)

There's more information on the other stories in the Cougars and Jackals anthology, as well as an excerpt from my story, and some buy links here: http://lucyfelthouse.co.uk/published-works/cougars-and-jackals/
Posted by Lucy Felthouse at 09:00

Nice post Lucy. Isn't it funny what can cause inspiration for stories. Sometimes something that happened long ago too. Like that you chose the older man/younger woman scenario...sounds like it'll be a fun read.

Congratulations, Lucy, on your latest release. As Christine says, it sounds a fun read and I love the story of how you came to be inspired to write it.

Thanks Christine and Lindsay - it was certainly fun to write, and I hope readers will enjoy it! :)