What would you do if suddenly confronted with something that undermines everything you believe about yourself and the world around you? Would you simply write it off or pursue it to the bitter end? A little knowledge can be a dangerous thing, since it can change how we see ourselves and the people around us. Is it wiser to just ignore that little voice that tries to tell you that you’ve been here before or that the person you’ve never met seems strangely familiar? When faced with the choice, Cassandra allows her gut feeling to lead her down a strange path, one that changes her life forever. 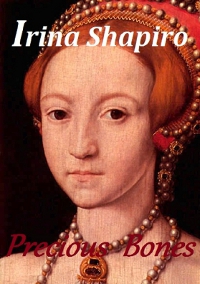 When the skeletal remains of a young woman and her baby are found entombed behind the kitchen wall of a historic Tudor house Cassandra is overcome with grief. She seems to know who the young woman was, but not how she knows or how she came to be there. Cassandra becomes inexplicably drawn to the house and the mystery of the "Bones of Blackfriars." As she begins to learn the truth about the Thorne siblings who occupied the house during the reign of Elizabeth I, her own life takes an unexpected turn and she finds that her fate is linked to the Thornes in ways she never dreamed of.

Irina Shapiro was born in Moscow, Russia and for the next eleven years lived the life of an ordinary Soviet child, in then communist Russia, until her family’s emigration to the United States in 1982. Due to her love of reading Irina was able to pick up English very quickly and was an honor student throughout her school career. After graduating from Bernard M. Baruch College in 1992 with a Bachelor’s degree in International Business Irina worked in advertising for two years before realizing that long hours and low wages were not the life for her. She shifted her focus to Import/Export and worked her way up to the position of Import Manager in a large textile house before leaving the work force in 2007 to focus on her autistic son. It wasn’t until Irina had been at home for some time that she began to write. Eventually the characters began to take on a life of their own and have conversations in her head and once she started writing her musings down the stories came easily enough. Irina incorporated her love of history and travel into her writing to create a rich and detailed background for the characters. Since then Irina has written five novels. She is currently working on a sequel to “The Hands of Time.” Irina Shapiro lives in New Jersey with her husband and two children.

This sounds fascinating. Definitely one for the TBR pile.
All best.

Thanks for bringing this new-to-me writer to my attention. Book cover is catchy, too.

It does sound fascinating!!