Redemption for the Devil 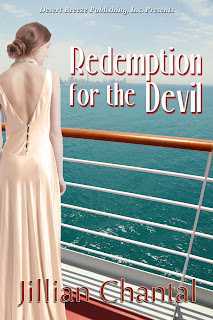 My newest release is called Redemption for the Devil and is a historical set in 1920. The hero and heroine are both Irish. One from Cork and one from Dublin. The hero is a member of the Irish Republican Army (Brotherhood) and the heroine is a feisty, brave woman that starts her life over when her father is missing and presumed dead in the Arctic Ocean.

This story was the one I wrote during my first NaNoWriMo in 2009. I wrote the first draft in 21 days. Liam, the hero, pretty much wrote the story for me. He woke me up from a sound sleep one morning in October, 2009 with these words:
"My name is Liam Cormac, and you're going to tell my story." Who could refuse that? LOL!

December, 1920: Mary Margaret Kincade, known as Peg, a devout Catholic, is the only child of an Irish adventurer presumed dead in an Arctic expedition gone awry. When her odious cousin comes to take over the family business and presumes to force Peg into marriage, she decides to make a new life in America by working her way across the ocean on a cruise liner.Liam Cormac, a Protestant member of the Irish Republican Army, fighting for freedom from English rule, signs on to the same ship with the intention of blowing it up in the middle of the ocean. Liam and Peg encounter each other in the first class passenger lounge and the attraction is mutual. When Peg is taken hostage by Liam’s partner, Liam has to make a decision about where his loyalties lie- with his country and his mission or with an Irish Catholic lass.

http://stores.desertbreezepublishing.com/-strse-187/Jillian-Chantal-Redemption-for/Detail.bok
Posted by Jillian at 14:12