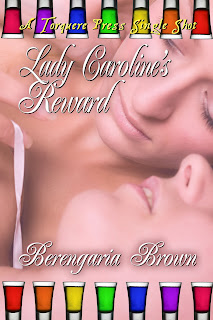 I’ve always been fascinated by the very strong women in history. So much of the history books tell the story of men – usually old white men – but when you dig a little deeper there are also a lot of stories about extremely powerful women. Henry VIII changed the established religious system of his land in his efforts to get himself a son and heir. Yet it was his daughter, Elizabeth I, who ruled wisely for many years and made England great.
Centuries later, Queen Victoria repeated this feat.
But it is the Regency period that I love the most. All those rules and regulations, every moment of every day rigidly filled with set activities, yet women found their way around the rules to lead fulfilling lives.
I began reading Georgette Heyer’s Regency romances as a young teenager, and fell in love with the era then, so it is natural that I would set some of my books in this time period.
“Lady Caroline’s Reward” which released from Torquere today, is my first published erotic lesbian Regency-set romance. It is about two women who manage to circumvent the rules of their day to find their own happy ever after.

“Lady Caroline’s Reward” blurb
Lady Caroline Eversley is the only child of the Earl of Blackshire. He is growing forgetful and she needs a chaperone so hires Miss Dinah Watkin, a distant relative whom she met once at a family gathering and enjoyed good friendship with.
While dealing with unwanted suitors, Dinah and Caroline fall in love, and Dinah teaches Caroline all about sex. But the problem of Caroline’s suitable chaperonage refuses to go away. And in Regency England unmarried women had almost no rights. Whatever will happen to them as the Earl’s health fails?

Later that evening, the women sat by the fire in the book room, their fingers moving diligently as they sewed. Hugh, Thomas and John were all upstairs with Caroline’s father. His suite of rooms was always heated warmly and he was never left unattended even for a moment.
Dinah gazed at Caroline. She really did look lovely in the firelight, her pale cheeks slightly flushed by the warmth of the fire, the long hair coiled neatly on her neck and gleaming with reddish highlights, her slender fingers busily employed mending one of her father's shirts.
Dinah's heart lurched. She could fall in love with this woman. Not only was Caroline beautiful, but she was also highly intelligent and courageous in the way she was facing the adversity of her father's, and therefore her own, situation.
"Have you ever been kissed?" Dinah asked suddenly.
"Well, just a few quick pecks by boys who shouldn't have when I was younger. At family gatherings and such. And one or two of the suitors have tried. That's why I made sure Hugh Howel was always with me. They totally ignored the fact my maid Betty was in the room!"
"Would you like to be kissed? Properly kissed?"
"But who-- What? You--"
"Yes, me. May I kiss you?" Dinah put her needlework down on the side table and slid along the sofa to the end where Caroline sat.
Caroline's hands dropped to the sofa. With no objection forthcoming, very gently, Dinah turned Caroline's head toward her and kissed those ripe pink lips. Softly, gently, sweetly, but with enough heat and passion to warm their lips. Very soon, Caroline responded, one hand reaching up to rest on Dinah's arm.
Caroline's lips softened under Dinah's caress, and Dinah licked along the seam, urging her to open her mouth. Caroline did, and Dinah’s tongue slipped inside, very gently running along Caroline's teeth and all around the warm wet cavern.
Dinah's hands firmed on Caroline's head, tilting it slightly as her tongue thrust into the younger woman's mouth.
Caroline groaned and responded more passionately, kissing back with enthusiasm.
Dinah increased the heat by sucking a little on Caroline's tongue pulsing in and out before retreating again.
Caroline melted into Dinah, leaning against the older woman and holding both her shoulders as she returned the kisses very passionately now.
Deliberately, Dinah took one hand off Caroline's head and placed her palm against Caroline's breast, smoothing it up and over the nipple. A nipple that was standing up, a hard, excited little peak.
Caroline's tongue delved into Dinah's mouth, exploring the roof, the sides, the teeth. Dinah responded by sucking on it as her hand slid down inside the bodice of Caroline's gown, hot on her flesh, to rub the globe of her breast and tweak the nipple between her fingers.
"I... Oh... More," gasped Caroline, then returned to kissing Dinah, her arms now grasping the older woman firmly.

Buy link:
http://www.torquerebooks.com/index.php?main_page=product_info&products_id=2909
“Lady Caroline’s Reward”, has its own webpage with covers, blurbs and excerpt: http://berengariabrownsladycarolinesreward.blogspot.com/

I have another Regency-set lesbian erotic romance coming out late this year. “Sappho’s Sisters”, will be available at Logical Lust
Blurb: “Sappho’s Sisters”.
Lady Eustacia Lumley is the only child of the Earl of Wentworth. It is her duty to marry well and ensure the succession.
Margaret Durrell is the fourth daughter of a gently born, but near penniless Vicar. She has no option but to marry a man who can provide for her and possibly for some of her sisters as well.
Both young women are very interested in Sappho’s poetry and ideas. One evening, Margaret has a headache and Eustacia offers to massage her scalp. This leads into sex which both find very enjoyable, Eustacia kissing, touching and sucking Margaret to her first orgasm.
The two young women fall deeply in love, but is there any hope for them? Or will they both have to conform to the rigid rules of Regency society?

Lovely excerpt and lots of intersting historical detail too.