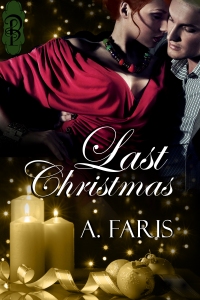 
Last Christmas inhabits the same 'verse, where demons mess about with the timeline, witches and vampires police the timeline, and love involves time paradoxes. The heroine, Nadine, is a time agent who has no time for Christmas. She's a jaded and cynical witch, who works on Christmas Eve. On the trail of a time insurgent, she does not expect to find love instead.
Buylink: http://www.decadentpublishing.com/product_info.php?products_id=415&osCsid=qj8n73s2d3h97eef6rhdhf76f1


Last Christmas is also in a print anthology Yule be Mine Vol. 2, published by Decadent Publishing. (Buylink: http://www.amazon.com/Yule-Be-Mine-Seleste-deLaney/dp/1613330286). 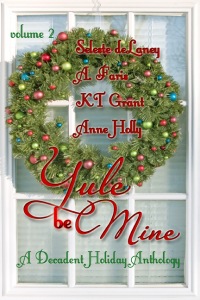 In the spirit of giving, I am holding a draw for Yule be Mine Vol. 2. To enter the draw, simply include your email address (eg, faris DOT writes AT gmail DOT com) with your comment. I will contact the winner for his/her mailing address by 21st Dec.

A. Faris loves stories, be it in the form of prose, poetry, plays, music, paintings. Above all, she loves stories of romance and love. Not surprising then, to find her writing romance. Since being an author is a full-time job for the lucky few, she also works as a translator, proofreader, teacher and Mum (which also includes in the job description ‘cook’, ‘cleaning lady’, ‘driver’ and ‘handyman’).
You can find her at http://afariswrites.wordpress.com/, where she reflects on narratives, occasionally sidetracking into the minutiae of life and, when she has to, indulges in some self-promotion.

‘Tis the season to be merry…

But not when you’re on the trail of a time insurgent, and facing a demon’s servant at every turn.

For Nadine Venus, Christmas is a jinx. Two deaths in the family and an estrangement, all on the blessed occasion, she spends every Christmas alone since. A knock on her door reveals a mysterious stranger, a stranger who kisses sweet, knows her soul and offers his heart with no reservations.

Not everything is as it seems, however, with more at stake than Nadine thinks…

A quick look out the spyglass showed a tall stranger, with shoulder-length hair that seemed unable to decide between being blond or brown. He hadn’t set off any of the level ten alarms surrounding her unit so, with a shrug, she opened the door.

She managed a glimpse of darkish eyes before she was hauled against the owner’s hard body. A second of lip contact, then, her instincts kicked in. She shoved, directing magic to her palms to lend her the strength needed to propel the solidly-built man away. He landed on his arse, looking surprised, as if he somehow expected a different response after mauling a stranger.

She watched comprehension dawn and he picked himself up from her front step, rueful now. “I knew it.” He eyed her still glowing hands warily. “Would you put that away if I apologized?”

Still suspicious, she kept her hands up. “Well? Where’s that apology?”

His shoulders shifted in some indeterminate gesture. “Four decades haven’t changed you much, Red.” He dimpled briefly, his eyes flicking to her hair with great affection, which made the simple adjective sound sweet. She told herself to resist the impulse to smooth her hair down.

“No, I don’t suppose it would have. You did tell me time passes differently for us.” He sketched a bow. “I’m sorry, Nadine.”

Email ThisBlogThis!Share to TwitterShare to FacebookShare to Pinterest
Labels: A. Faris, Last Christmas, paranormal romance, Yule be Mine

What a lovely, original idea for a Christmas story - sounds great!
ros_gemmell(at)hotmail(dot)com

Thanks! I had a blast writing it. :D Thank you for commenting.