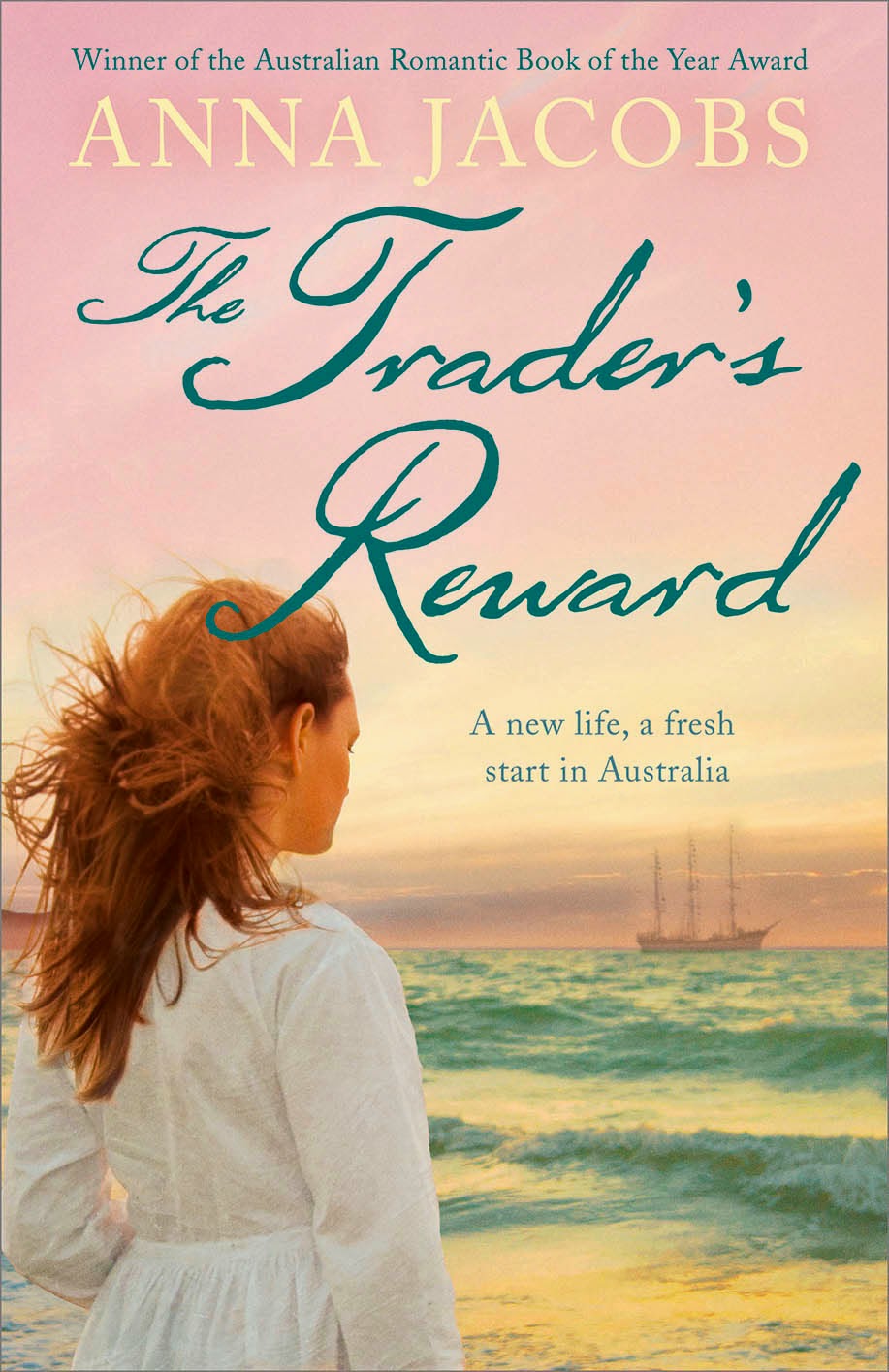 In April 2014 ‘The Trader’s Reward’ was published, Book 5 and final in the series called The Traders, set in Western Australia and Singapore in the 1860s to 70s..

I didn’t start off to write this series at all, but one character from the final book in the previous series (Destiny’s Path) would not get out of my mind. I kept seeing Bram Deagan, thinking of what might happen to him next. In fact, he e refused to go away.

I not only started to write his story, but found that he stayed at the heart of the whole series. He’s the most romantic, loving hero I’ve ever worked with. He’s not tall, dark and handsome, just middle height, scrawny and fairly ordinary – till he smiles! But he’s the most loving, big-hearted man you could ever hope to fall in love with – and be loved by.

When he took up the offer to travel to Australia with the son of a neighbouring family, the voyage opened Bram’s eyes to how ordinary people were making successful new lives. Why be a servant all his life? He too would make his fortune.

He had acquired some goods by chance and decided to become a trader. Since people from Western Australia often imported goods from Singapore, he travelled there to make his own contacts and find out what was available.

He met and rescued a beautiful woman, way above him in status, but destitute. They made a marriage of convenience, backed by the Chinese merchant she’d been teaching English to, who would now trade with Bram.

But the marriage became so much more, a deeply loving relationship, the sort that makes you stop and go ‘Ahhh’ very softly. Bram did start to make money, but he cared most about his Isabella.

I had a wonderful time writing about them as they set up Deagan’s Bazaar in Fremantle, Western Australia. She had experience in selling silks from her time in Singapore, so set up her own business within the Bazaar.

I planned to write three books about them, with members of his large but poor family coming to join him in Australia in the other two books.

Ha! It wasn’t nearly enough. Readers wanted more stories about the Deagans and I wanted to find out what happened next. I’m not a planner, I only find out when I meet the character and write the story. So my editor agreed to two more books, and I started dreaming of other linked characters.

But five is the maximum my publisher wanted for a saga series, so I’ve had to say goodbye to Bram and his family. I took great care to tie up all the ends from the whole series, then I had to give him a really good send-off, so I wrote a warm, fuzzy epilogue where he got his reward ie being surrounded by the family and friend he loved. He had such a big capacity for love of all sorts.

I wonder sometimes where these characters come from, the ones who grip your heart and won’t let go. Are they real, living in a nearby universe, popping over for a visit? They can’t just be figments of our imagination . . . can they?

And now, I’m starting a new series. I’m ‘finding’ some new people to care about. But I’m sad not to be writing about Bram. I wonder how he’s going on, if he’s still happy. He seems so real . . .

Anna Jacobs: Historical stories: ‘The Trader’s Gift, ‘Heir to Greyladies’, ‘The Trader’s Reward’ (4/14)  Modern stories: 'Winds of Change', ‘A Place of Hope’, ‘In Search of Hope’  http://www.annajacobs.com
Posted by Lindsay Townsend at 08:00