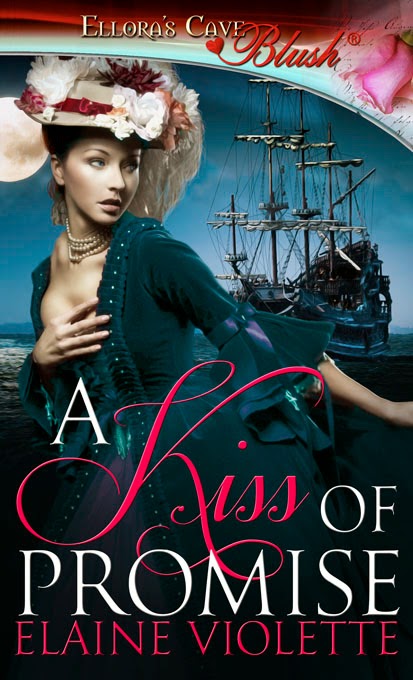 Adventurer Martin Blackstone escapes the stuffy rituals of England to seek his destiny in America. He leaves Alaina Craymore behind, believing she is better off without him. Suffering under the scandalous circumstances surrounding her father’s death, only Alaina’s love for Martin and the memory of their one stolen kiss have kept Alaina steady. But she hasn’t heard from Martin in far too long and cannot wait forever in the hopes that he will return from America. Just as Alaina begins to recover, one of her father’s associates emerges from the shadows with a choice—she must pose as his fiancée in America or he’ll send her brother to prison on charges of forgery. Willing to endure ruin and an uncertain future, Alaina agrees—she can do no less for the brother who’s spent his entire life protecting her. Only the man who spurned her can save her from the black mailing scoundrel and a ruined reputation.

Martin hasn’t forgotten Alaina or the kiss they shared. When word of her sacrifice reaches him, he’ll move heaven and earth to find her and make her his, no matter the cost.

Will the strong-minded, independent Alaina chose ruin over the fear that a marriage proposal has been offered out of duty rather than love?

A Kiss of Promise continues the story of the Blackstone brothers, introduced in Regal Reward. It will be released on April 3rd, 2014 by Ellora’s Cave Publishing under their Blush imprint and is presently available for pre-order on Amazon.

It was much too late to hope for his love. She had compromised her decency beyond redemption. What a mess she’d made of her life.  She still had nightmares of the night her father died, of the gun slipping from her fingers. The dreams had lessened during the year spent with Aunt Cornelia. She had gained some hope for her future, but now she lived in a stranger’s home under the guise of being a widow and strolled the streets in a gaudy pink gown.  Martin would certainly shun her. Better not to think of him.

When they reached the gates set up where the auction was being held, Harrington drew her to a quieter spot but near enough to watch the goings on.

“Remain here, Alaina. I must have words with one of the sellers before the carriages go up for auction. He waved a hand toward a bench that had one remaining seat available.  Do not move from this place.  You know what is at stake if I can’t find you when I return.”

Alaina’s mouth thinned but she nodded her acquiescence. When Harrington strode off, she signaled for Maria to take the empty seat. The woman was older and Alaina preferred to stand and observe the crowd.  As the minutes went by the crowd grew. She glanced toward her chaperone, though she had to rise up on her tiptoes to have the bench in view. She was surprised to see Maria in an animated conversation with another woman. Their hand gestures suggested their own excitement over the venue.  How she wished that she could find a friend in this mob of foreigners.

That was her last thought before clutching her throat. Martin.  He was there in the crowd, standing taller than those about him.  Her eyes grew wide as she watched him saunter casually toward where she stood. He hadn’t seen her. She watched his agile gait, his expression, one of expectation, even determination as he strode closer. She opened her mouth but clamped it shut again. She clenched her fingers into the folds of her skirt—she didn’t know what to do. Should she run to him, plead for his help, or hide? Instead of doing either, she stood paralyzed. She couldn’t believe that it was truly him. He drew closer and his eyes darted in her direction. He stopped when he saw her, nearly causing a man behind him to stumble back into the crowd.

She saw the disbelief in his features as he pushed his way through the throng, his eyes never leaving hers.  She didn’t move, every ounce of her being wanting to run to him, while a warning within her kept urging her to flee.

“Alaina? By God, it’s really you.” He rushed to her side, breathless, grasping her upper arms. “What are you doing here?” He scanned her surroundings. “Who are you with? I can’t believe you’re here.”

She stared up at him, the sensation of his strong hands on her arms, rapturous.  She didn’t want the warmth that encompassed her to end. She dared to lift her fingers and grasp his forearms, feeling the heat of his body beneath his shirt sleeves. Her lips trembled. She had to get hold of herself, say something.

“Martin,” she finally breathed. “I-I, I never expected to see you.  Richard…” she swallowed as the story she must tell him, formed in her mind. “I have come with my brother. He is here to handle some business affairs.  He is in there.” She pointed past the gates, in the direction where Philip had disappeared. “He wanted to look at the items at auction.  He preferred I wait here.” She was amazed that she could utter even a sound or put a sentence together. She’d believed she could fall no further, yet she’d become worse than disgraced, she’d become a shameful liar. Would he believe her? She continued, the words invented as she uttered them. “My maid came along and is over there, on the bench.” She waved a hand, thankful the bench was now fully hidden by the crowd moving forward.

“Alaina, I have thought of you often. And to see you here, I’m speechless.  Are you…how was your voyage? How long have you been in Boston?”

She realized that he was as tongue-tied as she and just as shocked at their meeting. Somehow, she needed for him to leave her. Her prayer had been answered only for her to realize how futile it was. As soon as she’d spoken her brother’s name, only seconds before, she had regained her senses and her purpose. She could not involve Martin, not now.  Phillip would return at any minute. She feared his reaction if she saw them talking. She had to complete her mission alone and deny her dreams.