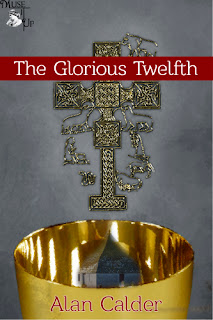 The Glorious Twelfth is my second novel, set mainly in my native Caithness with forays into France, Italy, Egypt and Poland. The genre is mystery/suspense with a thread of romance running through the story.


Genesis of the Glorious Twelfth


In The Da Vinci Code, Dan Brown speculates that the Holy Grail lies buried in the filled in crypt of Rosslyn Chapel near Edinburgh. This mysterious church was built by the Sinclairs in the first half of the fifteenth century, by which time the clan was well established in Caithness where it still holds the Earldom. Caithness, then remote and inaccessible, would have provided a much better hiding place for the Grail than Rosslyn, especially after the Sinclairs began to build a series of heavily fortified castles round the Caithness coast. In Caithness, the Sinclairs also built several mausoleums where many generations of their upper echelons were laid to rest. One of these, an enchanting building with an ogive shaped roof, is built over the remains of an ancient chapel to St Martin and surrounded by a graveyard which once contained a class II Pictish stone, conferring great antiquity on the site.

The Glorious Twelfth- Blurb
The Glorious Twelfth opens as archaeologist Ben Harris finds a Celtic stone and evidence of a medieval shipwreck on the Noster estate of Sir Ranald Sinclair. Careless talk by Ben at a conference in Paris sparks off a robbery at  Sir Ranald’s mausoleum, uncovering a treasure that has been hidden for centuries. The robbery follows the opening day of the grouse season, hence the title of the book. The chief villain, grail fanatic Russian Boris Zadarnov, also abducts Sir Ranald’s wayward daughter, Fran, who is already in love with Ben. American oilman Al Regan, a neighbour of Sir Ranald, leads a rescue party to Paris where Fran is freed and most of the treasure recovered, but the thieves escape with a ruby encrusted chalice.
For a series of misdemeanours, including failing to spot that the Celtic stone was a fake, Ben is sacked from his university job. He finds consolation in the arms of Fran and moves north to continue treasure hunting, making the discovery of his life near one of the ancient Sinclair castles. Has he found the greatest archaeological prize in Christendom, the Holy Grail? Will he be able to protect it from the malevolent attention of Alexei, younger brother of the deceased Boris?


Ben Harris was examining pottery fragments in the dig tent, already warming up under an August morning sun, when he heard the shout. It was from Angela in the trench on top of the hillock which the locals had always called, The Hill of Peace.


It wasn’t normal to call the field archaeologist for routine finds such as pieces of pottery, so he picked up his trowel and brush and rushed up the path to the dig. In his haste he forgot to put on the wide brimmed kudu skin hat, which normally restrained his longish mop of fair hair and gave him protection from the sun. He was excited by the call, not least because this was his first dig as the boss and the site had certainly looked of interest on the geophysics survey, carried out at Easter by a colleague.


Angela was on her knees in the metre deep trench, bounded by the foundations of a simple rectangular building, gradually revealed over the previous two weeks. She was carefully prising the compressed soil from a flat stone surface, in the middle of the floor of the building.


“Not a metre down. I’ll start recording and fetch the laptop just in case.” If it was an important find, he wanted to record the moment as it happened and not have to stage a reconstruction.


“There’s more, it’s a fish, I’ve got the tail,” she shouted, as he returned with the laptop.


“Wow, we have got something here.” Looking over her shoulder, Ben could see the fan of the salmon’s tail materialise from the dust. It was about half life-size and pleased him infinitely more than any of the real wild ones he’d caught with rod and line. “Let me check the geophysics.” His mind was racing at the prospect of an undiscovered Pictish stone.


“Is it that big anomaly we saw?” Angela asked.


“Spot on. That’s it.” He perched the laptop on the edge of the trench, allowing her to see the dark shadow on the trace.


As they bent down over the stone again, a shadow covered Ben. He looked up to see the tall slender figure of Fran, daughter of Sir Ranald Sinclair, the proprietor and dig sponsor, on the other side of the trench, blocking out the sun.  She was standing with her arms folded below her breasts, tapping a sandal-covered foot on the edge of the trench, causing a mini-collapse of soil.


From Ben’s low position in the trench, his first sight was the silhouette of her long legs showing through the thin fabric of her dress. Scanning up further, the sun was neatly eclipsed by her head and sparkled through the outer frizz of her lustrous deep copper coloured hair. It gave her a goddess-like halo, accentuated by the refraction of light through the prisms of her long dangling ear-rings. Her challenging presence made him think of Boudicca, the early Iceni  Queen who took on the Romans.


Ben narrowed his focus on her face. He got a fleeting impression of self-satisfaction as her eyes left the stone and met his briefly, with the faintest of smiles. She turned sharply on her heel and disappeared into the light without uttering a word. Her departure left him looking into the sun, temporarily blinded, but with the optical memory of her shape still imprinted behind his eyes. Ben shook his head to restore his sight and push her image to the back of his mind. The other students and volunteers on the dig began to assemble round the periphery of the trench, attracted by the allure of the square foot or so of exposed stone.


“What was that all about?” asked Angela.


“She seems very interested in the stone,” said Ben.


“I think she fancies the archaeologist,” said Angela with a hint of menace.


Ben did not rise to Angela’s bait. He suspected a personal sub-text on her part. She was being very nice to him and always seemed to be hovering within easy reach.


“I could lift it out for you with the JCB,” said Jay Fuller, an American based on the main platform of the Caithness Shelf oilfield, a few miles offshore. Jay volunteered on his rest days,  a break from the tedium of the production schedule. The other students sniggered at his unprofessional enthusiasm.


“All in good time, Jay; but you’re right; we will need the JCB for this one.”  Ben gave Fuller a break. He didn’t want to exploit his minor gaffe. He also realised that he would have to rethink the digging plan in the light of the discovery.


“Is it tea time?” asked the beaming Angela.


“Okay, let’s take an early tea break and think about what we need to do next.”


Over the tea break they discussed a new plan to focus on trench three. Ben  would join Angela on the stone and the others would work on fully digging out the rest of the trench. He also called Sir Ranald Sinclair, owner of the Noster Estate to tell him about the find and it was agreed that the proprietor would visit the dig at five p.m.


Best wishes to all

Alan, this looks fabulous. Best luck with it.