The best reviews, for me, aren’t just the ones which just laud your story or writing (although that’s nice enough). It’s great when a reader or reviewer “gets” your story, by which I mean they see into the heart of what you’ve written, or when they see something in your characters which you’ve not put there intentionally, but which is spot on. (Two readers have, separately, told me that one of my leading men has mild Asperger’s syndrome!)


I also enjoy getting reviews that don’t come from the “usual suspects”. Perhaps I’d better explain that. I write gay romances, usually historical, so I tend to get reviewed at the standard gay romance sites and at places, like Hearts on Fire reviews, where they cover both. So something popping up at the Historical Novel Review is a real fillip.
My next release, Promises Made Under Fire has had a spate of reviews already, most of them from places where I’ve not had a mention before, and some of which bridge the genre gap towards het romance readers. The write up at Attention is Arbitrary (love that name) says, “This would be an excellent entry point into MM romance” which is ideal for those of us who are trying to broaden our genre’s appeal.


It was a similar delight at Flashlight commentary (another great name for a site) which combines that same genre crossing.


Charlie Cochrane's Promises Made Under Fire broke new ground for me. Historic fiction has been my thing for years, but I can honestly say this is the first time I've sampled gay fiction...
Cochrane does a superb job recreating the sentimentality surrounding correspondence exchanged between servicemen and the loved ones they've left behind. 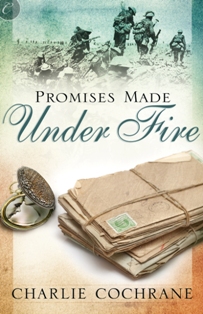 Posted by Charlie Cochrane at 21:14

I agree. Nothing makes me happier than when a reader "gets it". I often hide metaphor in my stories. It's exhilarating when a reader writes to tell me they found something and understand. Nice job Charlie.

Love in all its pairings is so valuable and so necessary to the human beings we are. The mechanics may be different, but the feelings are the same. Kudos, Charlie, on making an impact.

I keep repeating the same thing but having a reader who 'gets' you is just great. But you're such a fantastic writer, Charlie, doesn't everyone get you!

@Rose *nods* Yes, that's it, absolutely. And, of course, the reader sometimes finds metaphors you'd never intended but which must have been simmering in your brain.

@ Jane Thank you. Yes, the love story is universal.