Excerpt from Reluctance by Jen Black


Blurb: Frances Bowes, the richest young widow in England, saves Jack Slade from drowning, but Jack, living in his own private hell after the death of his wife, isn’t at all grateful. Newcomer Holbrook dazzles the neighborhood in his glorious regimentals and Frances’s mother, match-making hat firmly in place, claims that he’s admirable husband material. Frances isn’t impressed, but when the newspaper publishes an ugly letter questioning her reputation, she realizes someone is trying to force her into something she definitely does not want. 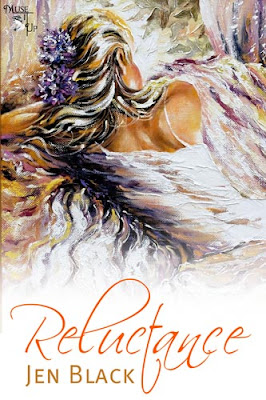 An absorbing tangle of emotions and a heart-rending denouement.


Jack could not breathe. A heavy weight pressed on his chest. A spasm clenched his body. He rolled to his side and vomited water onto the grass. Wheezing, he drew in a painful gulp of air, and got rid of more water. The pressure eased. He sprawled on his back.

Loved the excerpt.. those two are going to be a barrel of trouble to get together...Jean

I'm hooked! It sounds a great read - right up my street.

Jampacked scene! Don't know how to write those.:)

hey Katbalou I wonder where you got that name! Great movie!

I hope you all enjoy reading Frances and Jack's story!

which of your bllogs is the A-Z challenge on? Whenever you comment, I'm not sure where I should go...:))) although wherever I wind up certianly is interesting....