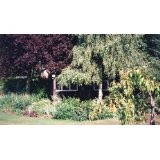 The picture is of a secret summerhouse. I used it for an illustration for this book, but next time I put something up it will have a proper cover.

First of all I would like to thank Lindsay for inviting me to blog here today. I have some news about a book titled The Witch Child/ Linda Sole, which was first published in hardback some years ago by Robert Hale of London. I've had the rights for years and have now put it up at kindle. Those who have a kindle love it, but did you know that you don't have to buy kindle to read their books? You can download an ereader for your computer and read them there.

The blurb for the Witch Child goes something like this.

She was beautiful, she was wicked, she was wanton and she drove men mad with desire. But to love her was to court despair. She was the Witch Child.

Here is an excerpt for you.

And learn I did !
I learned what it was to be cold and hungry in the long winter, which followed. I learned to go searching for driftwood on the beach when it was freezing cold and a biting wind blew in from the sea; to come home to the cottage soaked to the skin and to a stewpot containing only a few vegetables— unless we were lucky enough to catch a rabbit. That was seldom enough, for Granny rarely caught anything in her snares—it had been a hard winter for the rabbits, too.
I do not know how I survived that first year. I had been gently reared, and according to the laws of nature I should have sickened and died. Instead, I thrived. I grew thin but it was a tough, wiry leanness.
It was a hard life, so different from the one I had known. Often I would take out the little wooden horse, stroking its smooth surface lovingly. Then I would ache for the sound of my father’s voice, or the touch of my mother’s hands as she tucked me up in my cot at night. If only someone had shown me a little love, but there was no one but Granny, and she had forgotten how.
Sometimes we huddled together in front of the fire, listening to the howling wind. It tore at the cottage walls with a vindictive fury, and the waves lashed at the foot of the cliffs, sending spray high into the air. On certain nights, when the power of the storm was at its height, I sometimes thought I could hear the souls of drowning men, screaming in the darkness.
“The sea be terrible cruel,” Granny said once. “I lost a man and two sons out there on just such a night as this. Aye, she be a wicked mistress, the sea ...”
Looking at her then I began to understand what had made her the way she was. Loneliness and suffering will make granite of the softest heart in time, and I guessed that her life had been lonely. I drew closer to her, realising that she hated the howling wind as much as I. Somehow that knowledge robbed the storm of some of its power to frighten me and I no longer felt quite so alone.

I had been at the cottage for six months when I first saw the house, or, rather, I saw the gates leading to the estate. Huge iron spikes, flanked by stone pillars topped with a pair of eagles. They perched with beaks menacingly open, their wings unfurled as though ready to attack the unwary intruder. So real were they that I almost believed them the guardians they appeared to be.
“Where does that lead?” I asked Granny, pointing to the path, which wound into the trees.
“‘Tis Sir Ralph Frome’s land. He lives in the house beyond the woods.”
“ Have you ever been there?” I asked, made curious by the tone of her voice.
“Aye, once.”
I waited in vain for more. “ What is it like?” I persisted.
Her face was troubled as she looked at me. For some reason she was reluctant to satisfy my curiosity. “‘Tis big,” she said, “grey stone like these pillars and there be strange carvings above the arches in the walls. ‘Tis an accursed place and you’d do well to keep away from it...”
Her voice had risen shrilly and she seemed angry. I asked her why she was so upset and why she had been to the house if she believed it an evil place, but her face took on a closed, secretive expression and she shook her head at me.
“Never you mind, girl. Just remember my words, no good can come to you from that place . . .” She broke off, her eyes dilating with fear. Suddenly she gripped my shoulders, her fingers biting into my flesh. She seemed to look through me at something only she could see, studying my face as though trying to discover the answer to some mystery. Then she shook her head again.
“I can’t see ... ‘Tis not clear ...”
“What is it, Granny, are you ill?”
My question appeared to break the spell. She started, a dazed look coming into her eyes. “What? Ill, you say? No, I’m not ill. ‘Tis nothing, nothing at all . . .” She frowned, glancing up at the dark clouds gathering overhead. “‘Tis time we were going home—we’ve picked herbs enough for today.”
She hurried me past the forbidding gates with their fierce guardians. I went reluctantly. My curiosity had been aroused and I longed to squeeze through the thick hedge, which bounded the estate. Granny had warned me against the house but she was always warning me about something, the list was endless. Usually I obeyed her without question but this time I could not help thinking that there would be no harm in just looking at the house—from a safe distance, of course. However, I was careful not to let Granny guess that I intended to return one day—alone.
She was in a hurry to get home before the storm broke and she forgot the incident almost at once. There was work to be done, she said. I knew that meant she would be up half the night, boiling the herbs and berries we had collected in the big black pot over the fire.
Granny understood the wild plants and berries. She made a potion, which was supposed to cure anything. It smelt vile and tasted worse, but she swore that it was the secret of her long life and she drank some every day. She made me drink it too, but whenever I could I poured it away.
Sometimes she took a pitcher of it to a house in the village, just as dusk was falling, and knocked at the back door. When the door opened a man would glance anxiously down the street to ensure that no one was watching, before snatching the pitcher from her and thrusting some coins into her hand.
Once I asked her who he was but she told me to mind my tongue. It was not until long afterwards that I discovered he was the apothecary. He sold Granny’s mixtures to the villagers, pretending that he had made them himself. But when I asked her why she didn’t sell her cures to the villagers herself Granny got very cross and said that it was better the way it was.

I grew taller and brown like a gipsy as spring turned into summer and summer into autumn.
Sometimes, with a kind of envy, I watched the children from the village laughing and playing together. They would run on the beach and climb the cliffs, but they never came near the cottage. One day, driven by the desire for friendship, I called out to some of them. But as I approached they screamed and ran away.
“Don’t be frightened,” I cried. “I only want to talk to you.”
A dark-haired boy, older than the others, took a step towards me, a friendly grin on his face. But his friends pulled at his sleeve.
“Come away, Tom!” one of them said. “Her granny’s a witch. She’ll turn you into a toad if you play with her.”
“Please don’t go, it’s not true,” I said, but I could see he half believed them.
His face paled and he hesitated momentarily, then he turned and ran away down the hill. I stared after him, brushing a tear from my cheek. I wasn’t going to cry. Who wanted to play their stupid games anyway? Holding my head high I walked away, their cruel taunts ringing in my ears. I had something more important to do than wasting my time playing children’s games. It was at that moment that I decided I would find a way through the hedge, which divided Sir Ralph’s estate from the common land.
The thought of that house tantalised me. Granny had forgotten it; she had warned me against going there and believed the matter ended.
Perhaps it would have been if the children had allowed me to join in their play, but they had turned away from me.

This sounds interesting. I will have to look for it.

Thank you. It is now available in kindle both US and USA. If you don't have kindle go to the kindle page and download an ereader for your computer.