A wintry London scene from A KNIGHT'S CAPTIVE 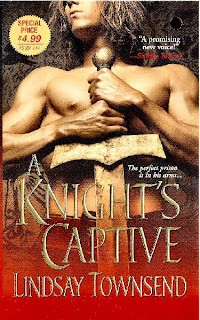 Here is a wintry London scene in 1066 from my historical romance, A Knight's Captive, where the heroine Sunniva and the hero Marc are having to travel through the tense, newly occupied Anglo-Saxon city to meet William of Normandy - the new ruler of England.

Excerpt:
The sun was still rising when Sunniva and Marc set out for old King Edward's new abbey church at Westminster. Sunniva was uneasy and not only at having to pass through London.
"What manner of man is this Odo of Bayeux?" she asked, whispering in case any townsfolk heard the French name. Marc had said London had now sworn allegiance to William. If they had, it was only because William's army were camped close by and he and his men had burned and devastated parts of the city and the surrounding countryside. Each time Marc had cause to slip out into the narrow, twisting streets she had been in an agony of anticipation and dread until his safe return, especially last night, when he was gone for hours. He could pass for English now but only two nights ago when - praise be to Freya! - the children had been sleeping, she had heard a dreadful hue and cry echo through the deserted streets: "A Norman! A bastard Norman!"
She had been trembling at the shouts and curses and shivering at the frantic footfalls under their window. Marc had warned her not to look out but listening to the mob and seeing the glare of torches through the chink in the shutters had been bad enough. She did not dare to think what had happened to the hapless foreigner: kicked and hacked to death most likely. They had not run him down by the Goldsmith's Inn but she had heard his desperate sprinting and once the wall had shaken as the stranger crashed against it.
Putting the stranger's ghastly fate from her by a deliberate effort of will, she said, "How do you know Odo?"
"I sold him a war-horse in Brittany," came back the flat, laconic reply. "And gifted him several more."
The way he spoke, Sunniva knew that the "gift" had been delivered by some kind of force. Marc confirmed this by saying next, "Odo and his men had set up a hunting camp close to my mother's. He saw my horses and liked what he saw."
"Hence the gift," Sunniva remarked. "I suspect that he is the kind of man who does not take 'no' as an answer."
"Not when he was within reach of my mother, certainly," Marc agreed, his handsome face stripped of all expression. "Odo also took a drink from her well, in my mother's best silver cup."
"He kept the cup, too," Sunniva guessed, stepping round a pile of rotting cabbages whose unwholesome stink had briefly made her gag.
"He did indeed. Odo likes treasure."
"But he is a holy man!" Anxiously Sunniva glanced up, in case anyone was leaning out into the street and could hear this.
Marc snorted at that. "Bishop he may be, but he is William's half-brother first and the same grasping blood flows in his fat, bald body." Marc glanced at the staff in his hand; he was using it to prod the ice puddles, in case any were hip-deep under the frosting. "Do you know he has a mace, studded with nails, or something like? It is said he uses it in battle to brain his enemies." Marc's eyes gleamed for an instant. "Of which there are many."
"How did you find him in this huge city?" she asked, falling into step with Marc down some stone steps showing fire-scorch marks.
Marc scowled at the fire-marks, his bright brown hair ruffled by a chill breeze as he raised his head, staring off into the distance where smoke still rose from field and woodland blazes lit by William's plundering army.
"Such men as Odo are easy to trace. In William's army camp, his was the most opulent tent. I bribed a guard and sent a copy of my seal ring ahead, in wax, as token of my good faith, and he remembered me. He saw me yester evening and promised he would speak to the king on my behalf."
Yesterday evening Marc had been out past curfew, Sunniva remembered again, and while he was away she had tried to teach the girls to hem neatly, her fingers cold and fumbling in her terror for his safety. Now he snapped his fingers, as if this whole lethal business was easy, and smiled to assuage Sunniva's constant dread. "Odo gave me a parchment to show the guards at the coronation," he said, "so we may pass through unhindered."
If we reach Westminster safely, Sunniva thought, though she said nothing. Nearby, a group of ragged beggars lurked in the ruins of a charred house and these now shuffled forward, blinking, into the misty half-light of the morning. Seeing their wasted faces and desperate eyes, Sunniva looked about herself for coins but found none. Snug from the whipping wind in her new white furs, she felt ashamed.
"We can do nothing for them," Marc breathed, flipping the lead beggar some small coins and hurrying her on. "Come, I can smell a fuller's and I would be past that as soon as we may."
Her breath held in against the truly vile, stale smell of urine, Sunniva ducked under a low house beam jutting out into the alley and rounded the corner into another deserted street. She could see the river ahead, milky-white and glossy as a new ribbon, lined with wharves and jetties. Already the air seemed sweeter, the houses more fine. Some were still the sunken-floored huts she had hurried past in other parts of the city, but more were bigger, with many shutters and brightly painted doors.
"Where is everyone?" she mused aloud, and Marc answered, "At Westminster, perhaps." His teeth showed very white in his lean face as he grinned at her. "Maybe even you English are learning to cheer the Normans."
Best wishes, Lindsay Townsend.
http://www.lindsaytownsend.net/
Posted by Lindsay Townsend at 08:00

Unfortunately smell... yep, me, too. It struck me as I read your most excellent excerpt, Lindsay, why we are so desperate to celebrate Christmas time as something jolly and good... so much sadness and despair for the human race.

Now, I wish I had a story set in the British Isles. Alas, I do not.

Thanks, Linda! Thanks, Savanna - I agree with your comments re Christmas, too.
If you ever have a story with a whiff of British Isles in it, please come along and welcome - most welcome!

Oh, great stuff. I just want to keep on reading.

The stink in medieval cities would, I'm sure, make all of us gag but I wonder if people then were so accustomed to the smells that they didn't actually notice them?