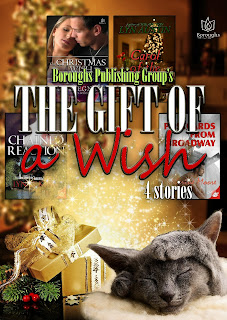 My recent lunchbox read, titled Chained Reaction, has now been published with three other poignant short stories in a Christmas anthology, THE GIFT OF A WISH.

Here’s a little of what my story entails:

Five years ago, a prison sentence took away Jamie and Lucy’s happy ever after. Today they’ll start getting it back.

Jamieson O'Sullivan had a reputation for being wild and reckless so when he is sent to prison for five years, it came as no great surprise. To Lucy, his girlfriend, the effect it had on her was devastating.
Now he is out and ringing her at the home of his cousin, Michael, the man she is now living with. This is the first time they have been in contact as Jamie cut her and all friends and family out of his life on the day of sentencing.
Hearing his voice has her fleeing to meet him because despite his betrayal of their love, Lucy has never stopped loving him.
For Jamie, prison took away his freedom and Lucy. He couldn't have one without the other and that still counts when he is released. Prison has matured him. This time he needs her to know how he feels but before he can do this, the events of the past have to be confronted.

Find out more about this and my other published novels by visiting www.lynnekingauthor.co.uk.
Posted by Lindsay Townsend at 18:17

Email ThisBlogThis!Share to TwitterShare to FacebookShare to Pinterest
Labels: Chained Reaction, Lynne King, The Gift of a Wish

Thanks for this, Lindsay.