My name is Erin O'Quinn, and I have gained some recognition as a writer of M/F historical romance set in the Ireland of St Patrick.

Now, with the coming publication of two novels in the Iron Warrior Series, my romances take a dramatic turn--away from the traditional, even expected coupling of men and women and to the outright "balls-out" passion of two men for each other. 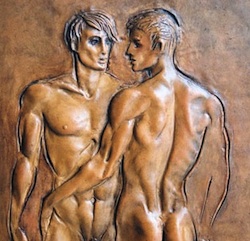 The M/F novels have followed a logical progression, from the time in ca. 432 AD when Caylith lands with a group of 300 immigrants in the area of present-day Belfast, to their migration to Armagh and the Hill of Macha where St. Patrick has established his ministry. From Armagh, the immigrants from Britannia make their way to Derry, where Caylith has been ceded land by the High King. 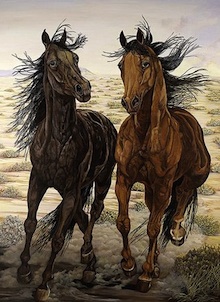 All the while my Dawn of Ireland novels track the immigrants, the characters Gristle and Wynn are on the periphery, sometimes coming into Caylith's focus and other times receding. Forty year-old Gristle is Caylith's armsman, a professional ex-Roman soldier and former guerilla-style fighter who served a Welsh lord. Wynn is a man half his age, a pony trainer who once had the raw beginnings of a romantic relationship with Caylith. As soon as  readers pick up the first series novel Warrior, Ride Hard, they will see that these two characters have been close to Caylith all along. And they will see that during most of the time period covered by those books, the two men have been living together in a homoerotic relationship. For readers of the trilogy, this may come as a shock. Who'd have thought it?

The first question a reader might ask is this: is it possible that two gay men could live together and establish a complex relationship in the context of the culture and beliefs of the time?

The short answer is yes. The centuries-old Brehon law did not proscribe gay relationships. In fact, the harshest "punishment" I have found for homosexuality is that a married woman who discovers that her husband is gay may be granted an automatic divorce. The law is silent on any other aspect of homosexuality. Now, 1500 years later, we will never really know how people felt about the "morality" or propriety of gay relationships. I suspect that they were understood, tolerated, probably even largely ignored. He who sired no children did not enlarge his cenél, his extended clan. That left more property and cattle for the others. 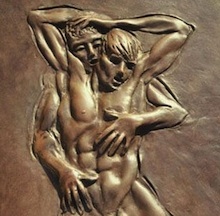 And so all the while Caylith and her immigrants are having their own adventures, these two lovers discover each other, come together in vigorous lust, and slowly begin to feel a deep emotional attachment to each other--all in the context of sometimes humorous, sometimes grim adventures in the badass environment of Old World Ireland.

Warrior, Ride Hard is not just the story of Gristle and Wynn. It is also the story of Gristle and a lost love--Tristus, the runaway whose parents have been killed by Picts. This is a man whom the Roman soldier Gristle met and seduced ten years prior to the present story. He disappeared from his watch one night, instilling an immutable sorrow in Gristle's deep subconscious. The story, then, revolves around the complex relationship among these three men.

On my new blog, "The Man in Romance," I have excerpted the opening scene of the novel. You may wish to read that scene before reading the next excerpt, for it introduces the protagonists and sets up the subtle attraction between them. That link is http://romancemanlove.wordpress.com/

In the excerpt that follows, the men have not yet become lovers. Gristle has gone to Éire with the immigrants. Wynn has stayed behind in Britannia to transport a group of Welsh mountain ponies to the Wicklow mountains near present-day Dublin. One night during a rainstorm, Gristle hears a knock on his door. 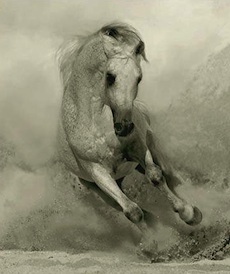 The armsman Gristle invites Wynn the pony trainer into his small clay house, out of the rain and over to the shelter of his fire. . . .
When Gristle turned around, Wynn was standing before the fire pit, but now he was draped in a dark woolen blanket. His hair had begun to lift away from his face in little clouds, no longer stuck damply to his skin. His short tunic was draped over the small bench near the armsman’s woven pallet.
Gristle walked to within a foot of him and sank to his knees. “This is my posture for meditating,” he told Wynn, “and for comfort too. I mind not that you look down on me.”
Wynn graced his play on words with a small smile. “Have ye given more thought to training me?”
“I have. It is a matter of when to begin. Step closer.”
Gristle studied the other man’s face for his clue to his state of mind. He clearly saw that Wynn’s eyes were over-bright and that his lower lip had begun to tremble very slightly. He looked-without-looking at his groin area and saw first a slight movement, then a discernible mound that told him Wynn was wearing an erection.
Wynn stepped closer, so that his thighs were about the height of the older man’s shoulder, and he stood only an inch or two away. Gristle, not looking at him, slowly put his hand inside the blanket and ran it along the back of Wynn’s thighs, until he reached his ass. He stroked Wynn’s muscled buttocks and stopped when his fingers found his anus. Then, lightly resting his hand there, he gently pushed Wynn’s thighs close to his face.
“Open the blanket,” he said softly.
He gazed on Wynn’s proud erection, seeing that it was almost eight inches long, and very engorged—stouter than his own. God, it is beautiful, Gristle thought as he lowered his mouth and his fingers began to play, just a little, near the other man’s asshole.
He heard Wynn’s sharp intake of breath and wondered for the first time whether this was the young man’s first experience, with anyone. He would find out. With one hand he stroked Wynn’s long drooping balls, and with the other he inserted his fingers into the boy’s asshole, one by one, as he licked and sucked him.
Gristle’s own prick had begun to shudder and throb as he sucked and played with Wynn. It took less than a minute before Wynn began to erupt, and he pushed his fingers as far up his anus as he could, then drew them out, back in and out again. In answer, Wynn pressed Gristle’s head hard into his groin, and Gristle heard his sharp sobs as his prick continued to spurt. 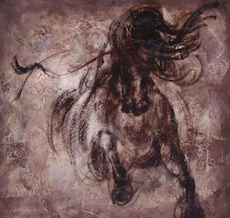 Then he drew Wynn’s blanket back over his nakedness and stood, moving behind him. Leaning fully into him, he put his mouth in the young man’s ear. “There is more,” he said, low. He knew that Wynn could feel his weapon, hard and insistent as a long knife, through the rough blanket. He felt Wynn’s head nod against his own in acknowledgement, and he seized the blanket at the shoulders and let it fall to the floor.
“The first time may be painful,” Gristle said, still close to Wynn’s ear. Wynn did not reply. “You do not have to endure it. I can train you to accept me, inch by inch. Not all on the same night.”
“I would—ie, that would be…very good,” Wynn whispered. Gristle spat into his own hands—much of it Wynn’s own thick semen—and he began to lather it on his ass, spreading his legs apart, loving the slickness. And when he put his own long prick into the crack of Wynn’s ass, he let it run and play up and down, manipulating himself with his own hands, while he licked and bit Wynn’s nape and shoulders.
“Kneel,” he told Wynn. When he was on his hands and knees, Gristle put his mouth into Wynn’s crack and began to search for his anus with his tongue. When he found it, he spread his ass as wide as possible and inserted his tongue, then withdrew it. He did it again and again. Wynn had begun to cry out, responding to the sensation. Right before he himself came, Gristle pushed his cock into Wynn—only a few inches, but enough to make him shudder and come, a climax that seemed to take forever. “If I never come again,” thought Gristle, “this will be the one I want to remember—ten years in the making.” 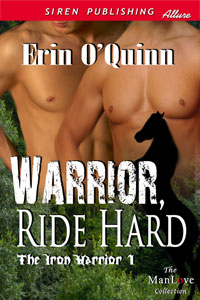 Warrior, Ride Hard (pub. Aug. 8) is available for discounted pre-order at
http://www.bookstrand.com/warrior-ride-hard
I hope you will also read my other novels, all in the same Dawn of Ireland universe:

Thank you, Lindsay Townsend, for allowing me to post my article on your amazing site. I am grateful for the opportunity to share this different direction in my novel writing.

I hope readers will feel free to ask questions and to comment on the social and cultural aspects of gays in ancient Ireland.

Somehow I think we of the modern age--early 1600's and later when more people began to read and misinterpret what the read--are much harder on one another than the ancients were. I think in order to survive the ancients focused on themselves and did not worry what others did unless it put their communities in jeopardy. What happens in bedrooms rarely jeopardizes a community. From the little I've read in ancient history, most ancient cultures accepted most behaviors as long as the heridity lines were maintained and children born to inherit. What happened after that no one seemed bothered by. They seemed to have a live and let live attitude. So different from today.

She: I don't know about later ages in history. The history of homophobia would be an interesting one to follow, though. I agree with you that most people were concerned with maintaining family property and other rights and did not, as we do now, judge other people's sexual preferences. I also know that the ancient Spartans had to be led to the marriage bed kicking and screaming just to sire a son. Some people think that's why the Spartan race died out.

I did not realize that about the Spartans. The Greeks also had different words and definitions for love. They did not feel that male/female love was normal. So marriages occurred for inheritance purposes but the highest love was male/male love.

Ah, the Greeks, those philosophers, lovers, politicians and all around thinkers! The word that comes first to my mind is AGAPE--the love of God for man, and vice-versa, as defined in the famous concenpt "faith, hope and love" of I Corinthians.

Then there was PHILIA, the word we associate with brotherly love, or any kind of non-sexual affection. And last but not least is EROS--erotic love, the sensual love between people.

Thanks for pointing it out, She... Love is a many-splendored thing!