The cities of London, Liverpool, Plymouth and many more were decimated by bombs during World War II. An intensive raid such as this was called a Blitz. Military, non-military adults and children died during this time.
Many futures were cut short by untimely deaths during this horrendous part of world history. In the midst of this chaos love bloomed and survived, despite the adversities the couples were forced to face.
My novel Blitz is inspired by my parents. They met and fell in love immediately prior to the war. This kicked off the inspiration for Velma and Jack’s story. I started their tale at the time of their meeting.
Not only did the happy couple have to be strong in the face of the fighting, but they also had to be strong to face up to Velma’s family. Her sisters still considered her the baby of the family and felt they had the right to dictate what she should do. Velma is faced with a budding romance, the threat of war and asserting herself so as to gain control of her own life. Can she and Jack survive these obstacles and emerge victorious? 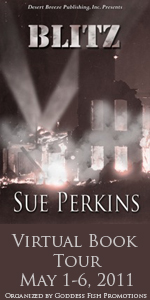 Thank you British Romance Fiction for giving me the opportunity to talk about my book and publish excerpts.

Hello there. I just found you through the link as 'Paula' followed me on my L'Aussie blog. This is a very powerful-sounding book and on a theme that appears timeless. I've just read references to it in the last two novels I read. I wish you well with its release!