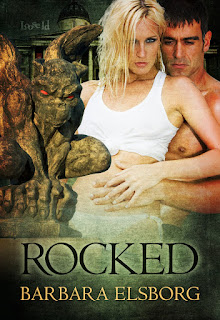 Blurb for ROCKED by Barbara Elsborg

Desired by men and women, Eli’s good looks make sexual conquest easy until he attends a party at the Supernatural Museum, where they land him in deep trouble. He says no to the wrong women, and his punishment is to learn the ultimate meaning of loneliness.

Much to her family’s disappointment, not only is Pepper single but she works a hard and dirty job as an apprentice stonemason. Pepper loves bringing stone to life with her chisel but struggles with the isolation that comes with being different. Then there’s her attraction to her boss, Alessandro, who appears to prefer men. When Eli materializes out of nowhere, Pepper can hardly believe her eyes. Now she’s caught between a rock and a hard place.

His hands hardened by years training to become a master stonemason, Alessandro is an expert at his craft, but not in matters of the heart. A daily frustration when he’s in hopelessly in love with Pepper and the man of his dreams has disappeared. As Alessandro’s team begins to restore the Supernatural Museum, he, Pepper, and Eli are drawn into the building’s secrets and risk losing everything they hold dear.

http://www.loose-id.com/Rocked.aspx
Posted by Barbara Elsborg at 10:15