One thing I'm absolutely nuts over is history. I love to dig and find the folk lore behind things, which more often than not sparks a story for me. In this case, that story is my new release, Stone Cold Kiss.

The idea popped into my mind when I read about the Blarney Stone, located at the top of Blarney Castle Tower. There are several legends on how this stone came to be -- some of which have biblical significance -- but all agree that kissing the stone gives the kisser the "gift of gab."

Here's a paraphrased version of my favorite legend:

About 500 years ago, a witch was saved from drowning. Some versions of this legend state that the King of Munster himself saved her -- others that it was a common soldier. Regardless, to show her gratitude, she cast a spell on a stone in Blarney Castle which would grant the King, if he kissed it, the power of persuasion.

This persuasion was reputedly used by Dermot McCarthy when he was asked to surrender Blarney Castle during the reign of Queen Elizabeth I. While he said he would be delighted to prove his loyalty in such a fashion every time the official came to ask him to surrender, something outrageous happened which provided him with an excuse.

In my story, Kelsey needs the power of persuasion in order to give a pitch to her bosses at Sullivan Advertising. If she can do so successfully, she will be awarded the position of Vice President, which she's worked diligently to achieve all her adult life. The only crimp in her plans? A sexy Irishman by the name of Seamus who asks her to move to Ireland to be with him. 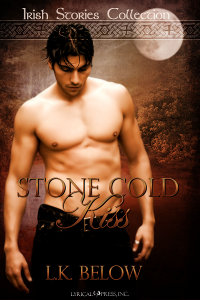 Dangling over the parapet of a castle, Kelsey Donovan doubts her decisions as she battles with her fear of heights. How will kissing the Blarney Stone change her life? But as the arms of a sexy Irishman close around her, she begins to change her mind.

Can it lead to a lifetime?

When Seamus McKinley rescues a tourist gripping the Blarney Castle for dear life, he never expected her to grab hold of his heart just as tightly. But can he convince her to meet him halfway?

Read an excerpt or buy the book here.


L. K. Below writes romance and speculative fiction. Her newest release, Stone Cold Kiss, is now available from Lyrical Press, Inc. Visit her online at www.lbelow.net or on her blog at http://lbelow.blogspot.com.
Posted by L. K. Below/Lindsay Below at 12:06

This sounds great, Lindsey, I love Ireland but haven't yet visited Blarney Castle. Wouldn't mind meeting someone like Seamus there though :-)

Haha, thanks for saying so Paula. If we all could meet Seamuses... *fans self*

Thanks for stopping by and commenting!

Sounds like a great book!! Love the legend, too. Good luck with your sales.