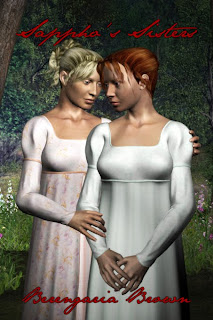 It was Georgette Heyer who addicted me to Regency romance, but I have also always been fascinated by the strong women of history. In a time when women had almost no rights at all, every now and then a woman overcame every obstacle to guide her people.
One of those was Queen Elizabeth I of England to whom my latest book, a Regency-set erotic lesbian romance, has been dedicated:
In memory of Queen Elizabeth I of England—a woman who refused to let her gender stand in the way of achieving her hopes and ambitions, and who ruled her country better than any man of her time could have done.
Other women who come to mind are:
Marie Curie, Queen Victoria, Joan of Arc, Cleopatra, Mother Theresa, Eleanor of Aquitane, Aspasia of Miletus, Boadicea, Catherine the Great, Sappho, Florence Nightingale, and in our own day, Aung San Suu Kyi. Of course, you will all have your own lists.

In “Sappho’s Sisters”, two women aim to make their own happiness despite the confines of the Regency era.

Lady Eustacia Lumley is the only child of the Earl of Wentworth. It is her duty to marry well and ensure the succession.
Margaret Durrell is the fourth daughter of a gently born, but near penniless vicar. She has no option but to marry a man who can provide for her and possibly for some of her sisters as well.
Best friends since their days at Miss Marcomb's Academy for Young Ladies, both young women are very interested in Sappho's poetry and ideas. One evening while visiting the Wentworth estate, Margaret has a headache and Eustacia offers to massage her scalp. This act of kindness leads them into an encounter they both find very enjoyable.
The two young women fall deeply in love, but is there any hope for them? Or will they both have to conform to the rigid rules of Regency society?

"Sappho’s Sisters": Excerpt PG 13
After a week in Town, Eustacia was keen to return to Green Meadows, her home outside London. It was ideally situated on good farming land, a full day’s journey from the bustle of the city—close enough to make a trip to Town for shopping or parties easy, but not so close that people were endlessly arriving unannounced.
She was particularly pleased to have Margaret staying with them for at least three months. Margaret’s long-suffering Papa despaired of marrying his four motherless daughters appropriately. Both Margaret’s Mama and her Papa came from the nobility, but the Reverend Mr. Durrell had inadequate funds to launch them onto the marriage mart. He loved them and wanted them to be happy, not just married to the highest bidder.
“Ah well, he won’t need to worry about Margaret for a while,” she mused.
Although Margaret was eighteen to Eustacia’s twenty-four, they both had lively minds and had formed an instant bond in the brief year they’d both been at Miss Marcomb’s Academy for Young Ladies—Margaret’s first year there and Eustacia’s last. They both loved learning and had read avidly. Since then, they’d kept in touch with long letters and had recently been reading and discussing Sappho’s poetry. Eustacia was looking forward to talking more about it with her friend.
Sappho’s sharp imagery, her immediacy, her control, and the rhythm and almost melody of her words were immensely appealing. Not to mention some of her underlying ideas—ideas which were increasingly compelling to Eustacia.
Eustacia had never been sexually attracted to men. While all the other young ladies at school had been sighing over the dancing master and the riding master, Eustacia had only desired to learn the subjects they taught. Their male beauty stirred her heart not one iota. When she had first made her curtsy to the Ton, many handsome and eligible young men had sought her hand for that lascivious dance, the waltz. Not one of them had made her heart beat faster. Fortunately, her father, the earl, had made no attempt to push her to accept any of the three very flattering offers he had received for her hand. Even more fortunately, Gervase’s younger brother, Anthony, had three fine, strong sons to inherit the title, so there was no pressure on Gervase to marry again and produce an heir, or to marry off his daughter to ensure a grandson to inherit.
But Margaret. Ahh, Margaret did make her palms sweat and her heart beat faster. Margaret’s bright, inquiring mind and ability to converse intelligently on any topic. Margaret’s soft brown eyes and shiny brown hair. Her white skin and pale cheeks that flushed enchantingly when Eustacia smiled at her.
Eustacia had read widely about Sapphic love and was eager to experience it—but only with Margaret and only if Margaret was willing. Meanwhile, her reading had taught her much, and with the help of a handheld looking glass, she had learned a lot about the art of self-pleasure. As for the anatomist Mateo Renaldo Colombo, who claimed to have discovered the amor Veneris, vel dulcedo—“the sweetness of Venus”—Eustacia was willing to bet her late mother’s emeralds that Sappho and her followers had known about their nubbins six hundred years before the birth of Christ!

http://berengariabrown.webs.com/
Posted by Berengaria Brown at 05:07

I don't usually read gay erotica, but I do love historicals. Maybe this will change my mind. Good luck with it.

I'd also include Emmeline Pankhurst in a list of strong women, together with all those others who fought so hard for votes for women.