I am constantly asked how I get ideas for my books. Sometimes they come about quite by chance. The idea for The Favourite Child certainly did. I was working on my novel Manchester Pride in which one of my characters needed guidance on contraception. The poor girl was worrying how to stop yet another baby coming. I was telling a writer friend of how I’d discovered in my research that there had been a Mothers’ Clinic over a pie shop in Salford in the twenties.

So began my mission to write this gift of a story. Ursula’s mother was Charis Frankenburg, and unlike my heroine, Isabella Ashton, was a qualified nurse who had served in France during WWI. But on her move to Salford after her marriage she was horrified to discover the lack of medical help for working women on how to stop the annual pregnancy. They suffered all manner of ills as a result, or committed horrific practices in order to rid themselves of what had often become a life-threatening event. Charis Frankenburg immediately got in touch with Marie Stopes, and with the help of local politician Mary Stocks, set about the task of providing such a clinic.

The two women were subject to considerable vilification as contraception was seen as a way for women to ‘prostitute their marriage vows’. They endured bricks thrown through their windows, defamatory reports in the press, and stern lectures from the pulpit issuing severe threats to any woman who dared attend this den of iniquity. Of course, the very opposite of the Church’s intentions was the result. The more the vicar or priest insisted women not attend, the longer the queues outside the pie shop.

‘How did you hear about us?’ Charis would ask.
‘Oh, we heard about it in church,’ came the answer.
The resulting furore was even worse than that experienced 40 years later with the introduction of the pill. 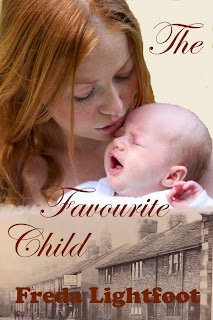 The clinic depicted in The Favourite Child is based on the work done by these fine women, and attempts to be true to their aims. Salford is as real as I can make it but the characters, of course, are entirely fictitious. The book is dedicated to the memory of all the women who were pioneers in the work of birth control and improvements in women’s health care.

For anyone interested in learning more about this amazing lady, I would highly recommend they read her autobiography, Not Old, Madam, Vintage. It sheds as much light on a remarkable woman as on the noble and worthwhile enterprise she helped found.


When the book was first published it was a best-seller and received good reviews. You can now read it as an ebook. Just click on the links below.

How amazing that, by total chance, you met the daughter of the woman who had opened the clinic!
I know Salford quite well so I look forward to reading your book.